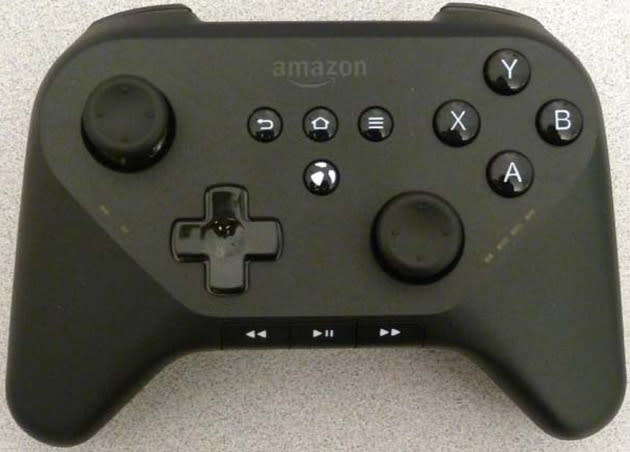 Amazon is probably making a game console, and today we've got a better idea of what that console's controller looks like thanks to Dave Zatz and the Brazilian FCC. The standards are all there: two offset, concave analog sticks; four buttons (A/B/X/Y) on the right front; a d-pad in the lower left; and triggers/shoulder buttons around back/up top. What's weird about this particular controller, however, are the other buttons. A slew of media controls sit at the bottom (play, fast-forward, rewind), and in the middle there are four buttons: Home, Back, Menu... wait a minute! These are Android buttons! Either Amazon's building a controller for Android or the console it's making is Android-based (we're guessing the latter). Head below for more!

So, what's the mysterious fourth button? Your guess is as good as ours, but it sure is shiny (the white spots in the images appear to be the reflection of the lights overhead). It could be a tiny trackball, but that's a tremendously bad idea and we think Amazon's smarter than that. Perhaps a power button for the console? Or maybe a share button, à la Sony's DualShock 4? Again, we can't be sure just yet. Feel free to venture your best guesses in the comments below (like we have to ask).

(Update: As several folks pointed out, the button looks an awful lot like the Amazon Game Circle logo, the digital service Amazon already has for games that add leaderboards and achievements, among other things.)

Further, there are six LED lights on the controller's front. While we expect the set of four on the right to be used for indicating which player is holding that particular unit, it's unclear what the other two (on the left) are being used for. Also, it takes two AA batteries.

It also looks like Amazon is employing Apple product assembly partner Foxconn to put the controller together, as Foxconn has factories in Brazil where this controller was put through government regulation. In case you have any doubt this is tied to Amazon (beyond the... Amazon logo on the controller itself), the regulatory filing was tied to "Amazon Fulfillment Services Inc."

In this article: amazon, android, controller, gamepad, hdpostcross, WR26UR
All products recommended by Engadget are selected by our editorial team, independent of our parent company. Some of our stories include affiliate links. If you buy something through one of these links, we may earn an affiliate commission.