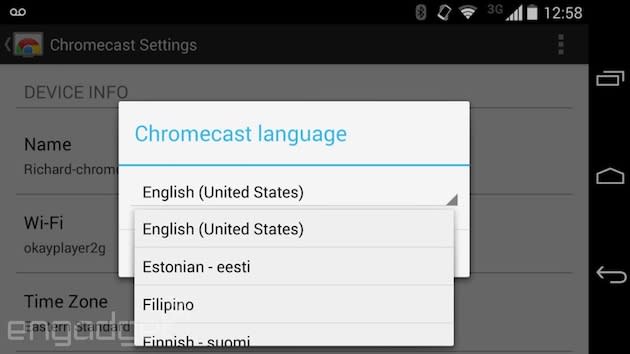 Google's Chromecast has been very well received so far -- and thanks to the SDK, becoming more useful with better support from music, video and photo apps -- but without international availability, it's tricky to get a hold of if you don't live in the US. Previous indications pointed to a UK launch this month, and things are lining up to make that happen. First, Google's Sundar Pichai mentioned the HDMI dongle would come to "many more countries" in coming weeks during his SXSW Interactive appearance. Next, the Chromecast control app on Android received an update making it available in 50 new languages. Android Police dug into the updated file itself, finding references for "TV offers" and possible 5GHz WiFi support. Finally, Liliputing points out a tweet by an employee of UK retailer Curry's, with a pic claiming to show a stack of Chromecasts that have just arrived, albeit without an exact release date or associated retail info.

Update (3/15): The Chromecast setup app for iOS has added "over 20" new languages of its own, and similar settings tweaks.

In this article: android, chromecast, currys, dongle, google, hdpostcross, international, mobilepostcross, uk
All products recommended by Engadget are selected by our editorial team, independent of our parent company. Some of our stories include affiliate links. If you buy something through one of these links, we may earn an affiliate commission.