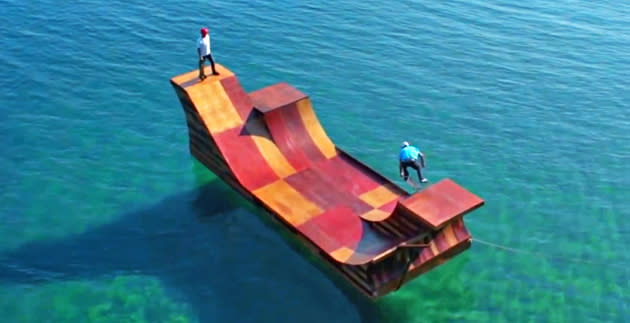 The Earth is a mysterious place. Scientists recently discovered a small, rough diamond that reveals the existence of an ocean of water more than 250 miles below the Earth's surface. But that's not all: A German company has figured out how to produce super-strong spider silk from genetically modified E. Coli bacteria. Electric vehicles have been picking up steam around the world. Case in point: Norway is set to become the first country in the world with one electric vehicle on the road for every 100 cars.

But politicians in the US are pushing back against electric carmakers. New Jersey made it illegal for Tesla to sell its vehicles directly to consumers last week, ruling that the company must instead sell its cars through a franchise. On the design front, the Eiffel Tower, one of the world's most iconic landmarks, is set to get a green upgrade as solar, hydraulic and wind power systems are being installed on the tower's first floor. And pro skateboarder Bob Burnquist made a splash when he and his team debuted an awesome new floating skate ramp in Lake Tahoe.

Big car companies aren't the only ones innovating with electric cars; in the Chinese city of Zhengzhou, one man built a tiny electric Lamborghini out of $815 worth of stainless steel and batteries to take his grandson to school. One of the world's most famous luxury car companies is greening up its image: Last week, Rolls-Royce announced plans to create a plug-in hybrid vehicle within the next three years. In two-wheeled transportation news, the company Revolights is raising money to produce the first integrated brake light for bicycles. Designer Dan Gestoso Rivers created a beautiful IKEA-inspired bicycle that can be assembled with a single Allen wrench. And Inhabitat took a look at the clever GiBike, a full-size electric bicycle that can fold up to fit in any apartment.

Of all the man-made impacts on the environment, noise pollution is perhaps the least discussed -- but it can have a powerful effect on our health. In response to the problem, Blue Forest designed the Quiet Treehouse, a cocoon-like structure that will be donated to The Chestnut Tree House Children's Hospice in West Sussex. In other architecture news, a design team in Vietnam created a beautiful vegetable nursery from bamboo and more than 2,000 plastic bottles. The Chilean design firm Smiljan Radic has been selected to build a temporary structure that looks like a giant boulder propped up on four large stones for the 14th Serpentine Gallery Pavilion in London. An up-and-coming architecture student named Tyler Short has designed an incredible shading system that rotates in three directions in accordance with sun's position. And a Barcelona-based artist group created one of the world's most unexpected public art installations by inflating enormous balloons inside buildings to transform them into mind-boggling works of art.

Solar panels will soon be much more accessible for American consumers: Best Buy and SolarCity just announced a new partnership to sell off-the-shelf photovoltaic systems. In other science and tech news, one company has produced a compact LED phototherapy device that can treat jaundice in infants. A new company called Isidore Electronics Recycling is giving ex-cons in Los Angeles another shot while diverting e-waste from landfills. The Open Source Beehive project aims to put the power to fight colony collapse disorder in the hands of everyday people. Not only does the project offer kits for building your own backyard beehive, but it also gives scientists new tools to monitor global bee health. And in wearable tech news, Recreus has produced a 3D-printed sneaker that is flexible enough to fold up and fit in your pocket.

In this article: eco, eco friendly, green, inhabitat, skating, transportation
All products recommended by Engadget are selected by our editorial team, independent of our parent company. Some of our stories include affiliate links. If you buy something through one of these links, we may earn an affiliate commission.