Apple to pay A$2.25 million fine in Australia for iPad 4G name 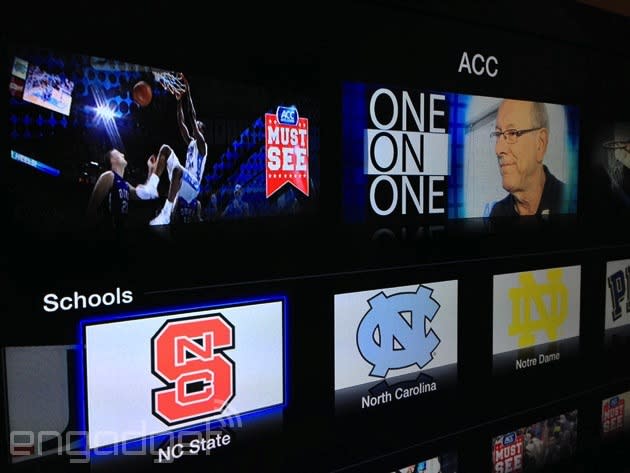 One day after its Men's Basketball Tournament wrapped up in Greensboro, North Carolina, the Atlantic Coast Conference has launched an Apple TV channel offering on-demand programming. For now, ACC Sports will offer "extensive highlights and feature programming" from the ACC Digital Network. What about NCAA Tournament streaming? You won't find that here. The rights to all March Madness games are owned by CBS, with games also broadcast on TBS, TNT and truTV. However, this channel will offer analysis and daily coverage during the tourney, following the conference's teams and a "Road to Texas" series. There's also access to Campus Insiders for catching up on the latest from schools in other major conferences (sorry, mid-majors). The announcement makes no mention of live event coverage, which isn't a huge surprise as ESPN has a firm grasp on that for Apple's streaming box with its WatchESPN option.

In this article: acc, accsports, apple, appletv, atlanticcoastconference, hdpostcross, sports
All products recommended by Engadget are selected by our editorial team, independent of our parent company. Some of our stories include affiliate links. If you buy something through one of these links, we may earn an affiliate commission.