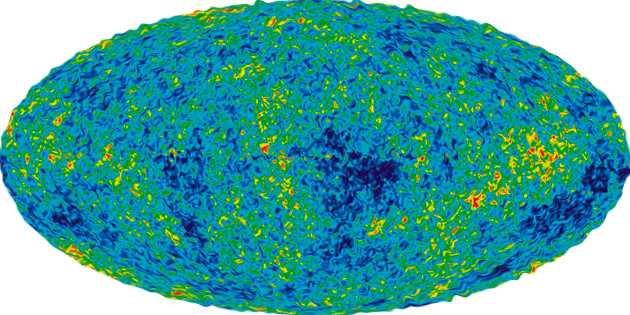 In the immediate aftermath of the Big Bang it's believed the universe grew at an exponential rate in what is known as cosmic inflation. Well, the first solid evidence of this growth, which would explain the uniform structure of the universe, has been discovered in the form of a curl in the cosmic background radiation left by the Big Bang itself. The "curl," known as B-mode polarization, is believed to be caused by gravitational waves produced during the first fractions of a second of existence. As it expanded and nothingness filled with extremely high-energy particles, waves of gravitational forces would have propagated, not unlike ripples on a pond, leaving behind scars.

These traces were observed by researchers from the Harvard-Smithsonian Center for Astrophysics and the BICEP2 telescope in Antarctica. What makes the observation particularly important, is that gravitational waves are a part of classical physics, where as inflation is considered a quantum phenomena. This would indicate that "gravity has a quantum nature just like the other forces," offering hope of a reconciliation between the two prevailing theories in physics that often seem incompatible. John Kovac, leader of the study, called the detection of these signals, "one of the most important goals in cosmology today."

In this article: astronomy, astrophysics, BICEP2, Big Bang, cosmic inflation, gravity waves, Harvard-Smithsonian Center for Astrophysics, inflation, space
All products recommended by Engadget are selected by our editorial team, independent of our parent company. Some of our stories include affiliate links. If you buy something through one of these links, we may earn an affiliate commission.