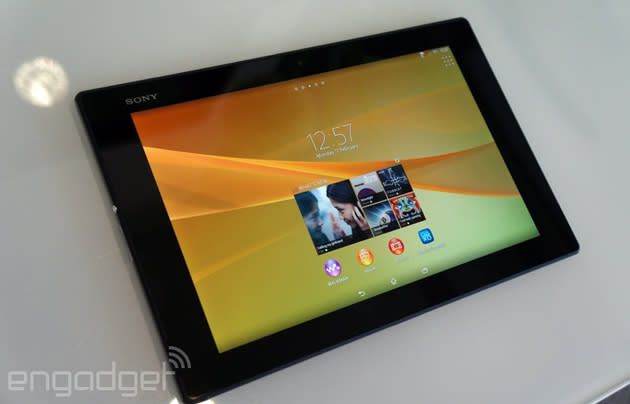 The mighty approver of gadgets, the FCC, likes engaging documentation about as much as we like digging through it for clues. Thankfully, a heap from Sony published today provided a very clear indicator as to what's been green lit for US consumption: the model number SGP521, better known as the new Xperia Z2 Tablet. Sony's thin, light and powerful slate will be available in WiFi-only and LTE flavors, with this specific model sporting a cellular radio capable of riding on basically any frequency you might encounter. The FCC docs agree with Sony on this, so it's curious then, that tests were carried out solely on LTE Band 17. That's AT&T's domain, suggesting this Z2 Tablet variant will be the locked kind you buy bundled with a data plan. There's no doubt other networks will have their own versions, of course, to complement device-only purchasing options. The FCC approval comes as no real surprise, given Sony said it expected to ship the tablet worldwide in March. The US price remains a mystery, however, but with Sony's online UK store asking for £499 (around $824 converted) to preorder the 16GB LTE model, we'd gamble on a roughly similar dollar figure.

In this article: att, fcc, sgp521, sony, sonyxperiaz2tablet, xperiaz2tablet
All products recommended by Engadget are selected by our editorial team, independent of our parent company. Some of our stories include affiliate links. If you buy something through one of these links, we may earn an affiliate commission.