Twitter's making it easy for content creators to show you ads 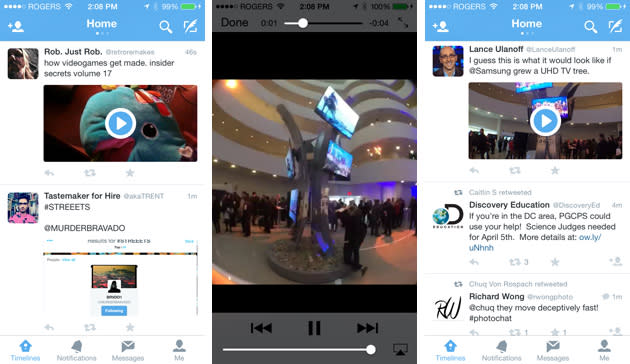 Checking out a linked video from within Twitter's official mobile apps is frequently a clumsy process, but it's about to get a lot smoother. The social network has started rolling out simple in-line video previews on both its Android and iOS apps. If you've received the upgrade, you'll see thumbnails of clips in your timeline; all you have to do is tap them to watch the footage from within the Twitter app. The move is no doubt meant to drive up views of promoted videos, but we won't mind if it helps us catch up on cat videos during our daily commutes.

In this article: amplify, android, app, internet, ios, mobile, smartphone, SocialNetworking, twitter, video
All products recommended by Engadget are selected by our editorial team, independent of our parent company. Some of our stories include affiliate links. If you buy something through one of these links, we may earn an affiliate commission.