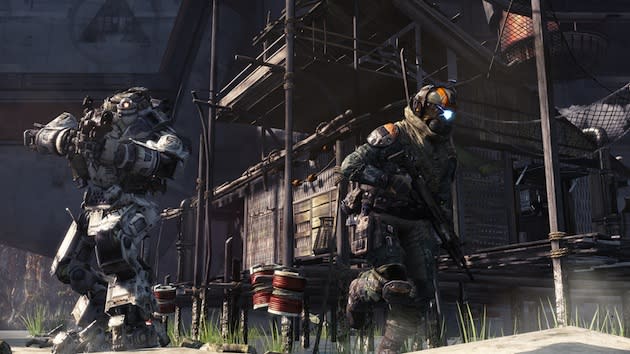 Many gamers already argue that the PC version of Titanfall is the best-looking of the bunch. Pretty soon, though, it won't even be a contest. Respawn plans to update its robotic shooter to handle both 4K displays as well as a host of technology from NVIDIA's GameWorks program, including full support for multiple GeForce cards, improved antialiasing and more realistic shadow effects. The upgrades aren't all that surprising. Some modern video hardware is powerful enough for 4K gaming, and developers have already used GameWorks to spruce up flagship titles like Assassin's Creed 4 and Call of Duty: Ghosts. Still, the visual improvements are bound to make a big impact -- Titanfall is one of the most important games of the year, and a good excuse to pick up a new gaming rig.

Update: Right now however, Titanfall is getting some tweaks on its servers that will change how it plays on PC and Xbox One. The updates will roll out over the next day, but you can see a changelog on Respawn's forums here. There are a number of fixes and updates included, and among them it appears the controversial Smart Pistol is having its effectiveness reduced, with slightly lower accuracy from hip fire and decreased damage when it's not locked-on. A troublesome glitch that allowed Burn Cards to be duplicated has also been fixed, and point values for certain actions in Hardpoint and Capture The Flag games have been adjusted.

@rjcc Yup, rolling out to both.

Our first Balance and Server patch is rolling out! Get the full details here: http://t.co/shJFV3CmTp #Titanfall

In this article: gameworks, gaming, gdc2014, geforce, nvidia, pc, respawn, RespawnEntertainment, sli, software, titanfall, windows
All products recommended by Engadget are selected by our editorial team, independent of our parent company. Some of our stories include affiliate links. If you buy something through one of these links, we may earn an affiliate commission.