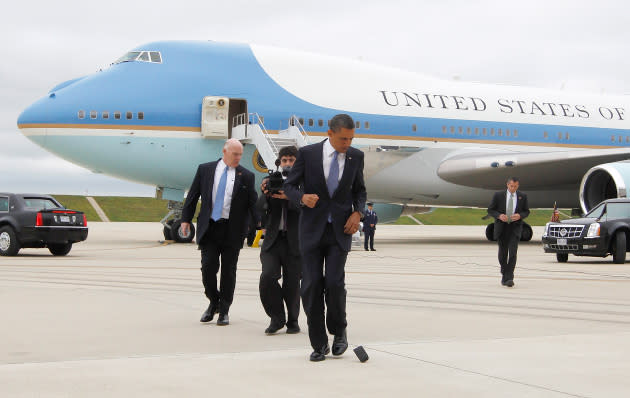 It's been a rough few years for BlackBerry, but America's highest office remains a dedicated customer -- for at least a few more months. According to a Defense Department spokesman quoted in the Wall Street Journal, the White House is currently testing smartphone replacements from other manufacturers. Android appears to be the OS of choice, with the agency's internal tech team evaluating handsets from LG and Samsung. As for BlackBerry, while the relatively small White House is hardly a significant customer from a financial perspective, the symbolic move would clearly be a significant blow. Though according to the aforementioned spokesperson, any move away from BB is still "months away."

Update: BlackBerry's response to the report (available in full after the break) includes this passage: "the U.S. government continues to choose BlackBerry for its unmatched security and cost effectiveness. Other vendors such as Samsung and LG still have a long way to go to catch up to meet the government's stringent requirements and certifications" Whatever the future holds, a White House spokesman tells the Washington Post that the Executive Office of the President "is not involved in any pilot program for testing non-BlackBerry phones."

"We value the long-term relationship we've had with the White House and have been securing their mobile communications for more than a decade. The U.S. government requires the highest levels of security. We were the first mobility platform to receive the 'Authority to Operate' certification from the Department of Defense.

Governments test new technologies frequently, but nevertheless the U.S. government continues to choose BlackBerry for its unmatched security and cost effectiveness. Other vendors such as Samsung and LG still have a long way to go to catch up to meet the government's stringent requirements and certifications. BlackBerry's operating system has already received the highest security approvals from the United States, Great Britain and NATO, and our latest operating system, BlackBerry 10, is already certified for high-security users in various NATO countries."

In this article: blackberry, government, lg, mobilepostcross, obama, samsung, smartphone, smartphones, whitehouse
All products recommended by Engadget are selected by our editorial team, independent of our parent company. Some of our stories include affiliate links. If you buy something through one of these links, we may earn an affiliate commission.