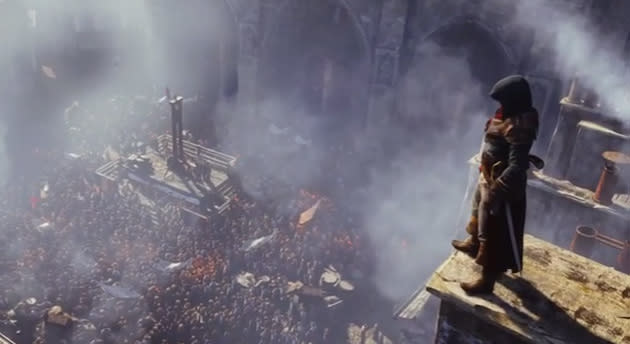 We hope you're making good progress on Assassin's Creed: Black Flag, because there's already a sequel on the way. Ubisoft has unveiled Assassin's Creed: Unity, a follow-up that takes the stealthy game series to Paris during the French Revolution. Clearly, you can expect guillotines to play an important role. You'll get a tiny hint of the experience in the teaser video below. However, it's worth noting that the trailer only shows Unity coming to PCs, the PS4 and the Xbox One -- there's no mention of the Wii U or previous-generation systems. We've reached out to Ubisoft to check on platform support, but there's a good chance that the developer is focusing all its attention on higher-end hardware this time around.

In this article: assassinscreed, assassinscreed5, assassinscreedunity, console, gaming, pc, playstation4, ps4, ubisoft, unity, video, VideoGames, windows, xboxone
All products recommended by Engadget are selected by our editorial team, independent of our parent company. Some of our stories include affiliate links. If you buy something through one of these links, we may earn an affiliate commission.