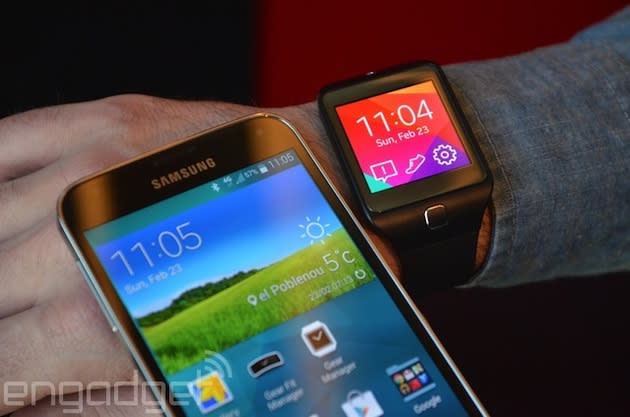 In the heyday of Palm organizers, when even the speeds of 3G data seemed like a distant fantasy, a debate raged as to whether the future of pocket devices could belong to one or two devices. Those who favored two devices argued that you didn't really want all the bulk and battery consumption of a pocket computer in a small device that you wanted to use primarily to make calls. They failed to anticipate that technology's relentless integration would enable these "pocket computers" to become the minimal-millimeter smartphones of today and that data networks would support access to apps ranging from social networking to mobile video that would trump voice for many users.

But at Samsung's Unpacked 5 event at Mobile World Congress last month, the star of the now less ostentatious show was not the latest generation of the flagship phone running the world's most popular mobile operating system. Rather, it was a small wrist device running a virtually unknown platform. And these products have no internet connectivity on their own. In fact, one of the benefits of the new line of Gear devices from Samsung is the broader variety of the company's smartphones that support them. If you believe in the promise of the smartwatch or Google Glass, you've at least partially vindicated the two-device proponents from two decades ago.

The future personal mobile landscape, though, will likely incorporate not just one or two personal devices, but multiple ones that are not only on our person but also in proximity.

The future personal mobile landscape, though, will likely incorporate not just one or two personal devices, but multiple ones that are not only on our person but also in proximity. In 2010, Switched On discussed why the digital hub, as the vision once espoused by Steve Jobs for the future of the PC, gave way to the cloud as the centers of our digital universe. That mostly remains true as far as media is concerned; smartphones still lack the large amounts of vast storage reservoirs that can be embedded in a PC (or at least were prior to the SSD trend).

But a new generation of wearables and personal devices provide feedback on our exercise, posture, food intake and simply offer silly sounds. Some, like Moov, already include adaptive scenarios for the use of multiple instances of the product worn in different locations on the body. The digital spokes of the PC focused on acquiring and sharing media while the new generation focuses on sending sensor and environmental data. While vastly different in function, size and design from the MP3 players and digital cameras that were once served as tethered outposts for acquiring and using PC-based media on the go, they still lack the native network connectivity of their forebears. That the smartphone has become a digital hub for a new generation of peripherals represents the passing of another torch from the PC.

Ross Rubin is principal analyst at Reticle Research, a technology, media and telecom advisory firm, and founder of Backerjack, which covers crowdfunded product innovation. He blogs at Techspressive.

In this article: 3g, column, galaxy gear, mobile, moov, palm, pocketcomputer, rossrubin, samsung, smartwatch, switchedon, unpacked
All products recommended by Engadget are selected by our editorial team, independent of our parent company. Some of our stories include affiliate links. If you buy something through one of these links, we may earn an affiliate commission.