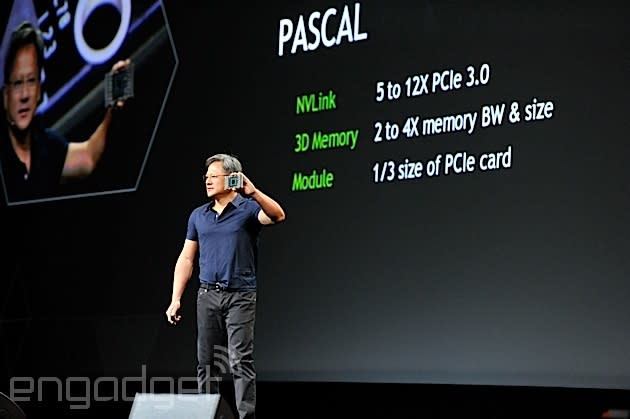 What comes after Fermi, Kepler and Maxwell? Pascal, according to NVIDIA CEO Jen-Hsun Huang. That's the name of the company's next-generation GPU, and Huang says it'll be smaller, faster and more efficient, naturally. "As we compute more, we have to move more data around," he said, speaking at NVIDIA's GPU technology conference in San Jose today. "It's the data bottleneck." He's talking about how the speed at which data is exchanged between the CPU and GPU limits the processor's ability to perform. He's also talking about how NVIDIA hopes to solve the issue, introducing NVLink, a chip-to-chip communication technology (a new socket) that promises to outpace PCIe communication speeds by a factor of five (but up to 12). The company says the PCIe standard probably isn't going away, but is confident that its dedicated GPU socket will allow it to leapfrog existing bottlenecks. Although NVLink seems to be designed to speed up GPU and CPU communication, Huang says it also improves data transfer between GPUs -- meaning that graphics cards linked in SLI could see a performance boost, too.

Of course, speed, power and efficiency usually come at the price of physical size. NVIDIA says it's working on that. "The GPU is already the biggest chip in the world," Huang says. "The interface is already extremely wide. How do we solve that problem?" His answer is 3D memory packaging. "We're going to, for the first time, build chips on top of other chips." By using a chip-on-wafer 3D integration, NVIDIA can build smaller GPUs that are four times as energy efficient as today's chips. The company is also working on other technologies to improve its next-generation GPU, including a unified memory system that will eliminate the need for developers to split resources between CPU and GPU memory. Exciting? Sure, but don't expect to pick up a Pascal-powered laptop any time soon: NVIDIA doesn't plan to ship the GPU until 2016.

In this article: gpu, gtc, gtc2014, Jen-Hsun Huang, nvidia, Pascal
All products recommended by Engadget are selected by our editorial team, independent of our parent company. Some of our stories include affiliate links. If you buy something through one of these links, we may earn an affiliate commission.