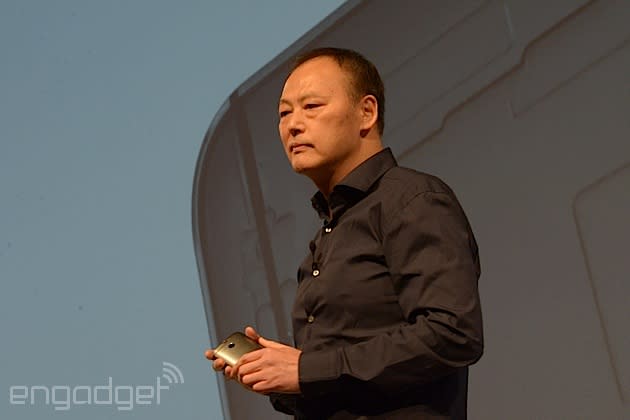 Led by CEO Peter Chou, HTC has developed a reputation for making phones that are just as visually appealing as they are functional. The company's latest flagship device, the One (M8), is another in a long lineup of beautifully crafted smartphones, and we had a chance to sit down with Chou to discuss the handset and some of the process behind how it came to be. "Our challenge was how do we break through from M7 to M8?" Chou told us. "I decided last year that I'm going to spend most of my time in product to help break through. Make it premium, like watches or jewelry. We want to stand out."

Chou was definitely deeply invested in the success of the M8, and was directly involved in its development -- he lost 5kg testing out the Fitbit integration, and even spent several weeks walking around with an M8-shaped block of wood in his pocket. "I tried to simulate when I take it out, how it feels when I put it on my ear, and when I talk." In other words, Chou wanted to see it through the lens of any other consumer. During this process, he provided feedback to his design team on which areas needed to be tweaked. "We were working back and forth on fine-tuning it; 'I don't like this curve, I want it to be more natural in the hands, I want this completely metal, completely pure.'"

Chou has a background in product management, so it's no surprise that he doesn't simply sit back and let the design team do all the heavy lifting. "I give them direction, what we want to achieve. They go think about that and then we start the process." He says that HTC goes through roughly 30-50 prototypes before finally settling on the final version; with each iteration, the team changed things like the shape, color, finish and battery shape and size.

Additionally, Chou told us that the process of developing the Duo Camera took HTC around 18 months. For a little more context, we spoke with Tim McDonough, VP of Marketing at Qualcomm, who said that the chipset manufacturer began collaborating with HTC very early on. Qualcomm needed to build several new features into its roadmap to ensure that it could keep up with the M8's hefty imaging requirements. According to McDonough, there were a lot of challenges in making sure the Snapdragon 801 could handle the load of the new One's complex post-processing features; he confirmed to us that the dual ISPs inside the 801 are 45 percent faster than the Snapdragon 800, which is a huge performance boost that opens the door for even more imaging possibilities down the road (whether from HTC or other manufacturers).

On a final note, Chou once again emphasized that premium watches and jewelry were behind the inspiration for the M8. Given what we've seen, it certainly appears that the company dedicated plenty of time and energy to making that happen. Of course, such a statement only makes us even more curious to see if Chou & Co. use the same model of inspiration for HTC's upcoming smartwatch; unfortunately, if he has a block of wood strapped to his wrist right now, he's doing a good job keeping it hidden. Regardless, take a look at the full interview above to hear more about how Peter Chou's vision has taken a major role in the design of HTC's products.

In this article: htc, htcm8, htcone, htcpeterchou, interview, mobilepostcross, peterchou, video
All products recommended by Engadget are selected by our editorial team, independent of our parent company. Some of our stories include affiliate links. If you buy something through one of these links, we may earn an affiliate commission.