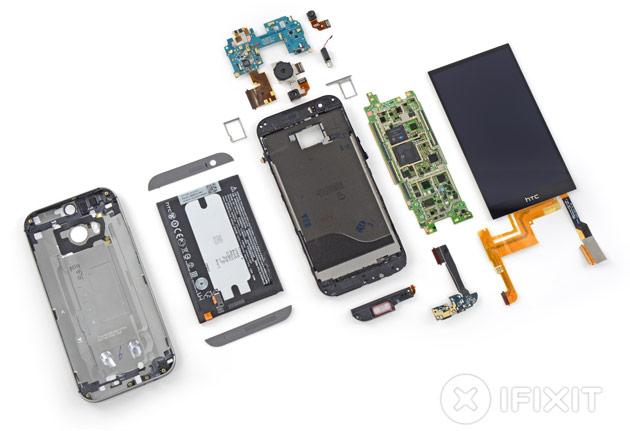 While most people would be happy to have a new HTC One (M8) to play with, our friends at iFixit aren't "most people," and they're back doing what they do best: reducing gadgets to component confetti. Having said the necessary prayers and got to work, iFixit was delighted to find screws holding the main body together -- an omen of repairability, perhaps? The situation quickly "turned ugly," as a mass of tape and copper shielding had to be removed, only to expose a glue-fixed motherboard. Other components and the battery were found to be glued just as liberally, and having finally reached the display, iFixit accidentally cut the digitizer cable, essentially breaking it. It'll probably be of no surprise, given the narrative, that the new HTC One scored a measly two out of ten on the repairability scale, due to teardown difficulty and risk of damage. It's an improvement, at least, over the old HTC One's score -- iFixit didn't have the super-secret tool, mind -- but it's probably best you keep your M8 out of trouble all the same.

In this article: htc, htcm8, htcone, htconem8, ifixit, mobilepostcross, newhtcone, teardown
All products recommended by Engadget are selected by our editorial team, independent of our parent company. Some of our stories include affiliate links. If you buy something through one of these links, we may earn an affiliate commission.