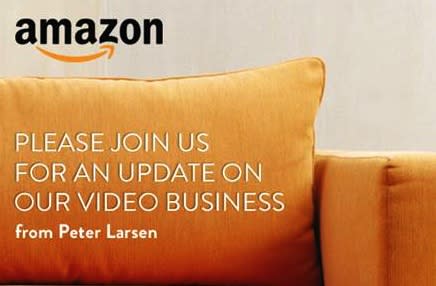 Amazon's name has been circulated pretty heavily in the rumor mill as of late, especially when it comes to a streaming music service and set-top box. So we aren't necessarily surprised to see the company send us an invite to an event April 2nd for "an update to our video business." That's the only clue we have -- unless you count the image of a couch as a hint -- but given the aforementioned rumors, it seems very likely that we're going to see the set-top box that's been rumored for so long. If so, this should be Amazon's answer to other media streamers like Apple TV and Roku. We've heard whispers that the new box will run on a forked version of Android, much like the Kindle Fire, and will feature Netflix and Hulu Plus apps. Whatever Amazon does announce, we've got the event on our calendars and we'll be there to get you the latest updates.

In this article: amazon, hdpostcross, invite, mediastreamer, pressevent, PrimeInstantVideo, settop, settopbox
All products recommended by Engadget are selected by our editorial team, independent of our parent company. Some of our stories include affiliate links. If you buy something through one of these links, we may earn an affiliate commission.