Office for iPad will reportedly get trackpad support 'by the fall' 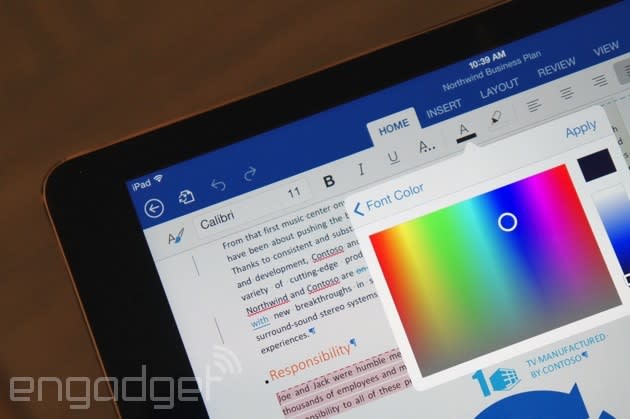 Although the Office for iPad suite is relatively full-featured, it won't print hard copies. That's a glaring omission even in this increasingly paperless era, we'd say. Not to worry, though: Microsoft tells PCWorld that printing support is coming as part of future app updates. The company hasn't said just when those upgrades are due, but Office general manager Julia White promises to "iterate very fast" on the fledgling productivity software. In the meantime, don't toss out your conventional PC -- you may need it to print out that next contract or term paper.

In this article: excel, ipad, microsoft, office, officeforipad, powerpoint, printing, productivity, software, tablet, word
All products recommended by Engadget are selected by our editorial team, independent of our parent company. Some of our stories include affiliate links. If you buy something through one of these links, we may earn an affiliate commission.