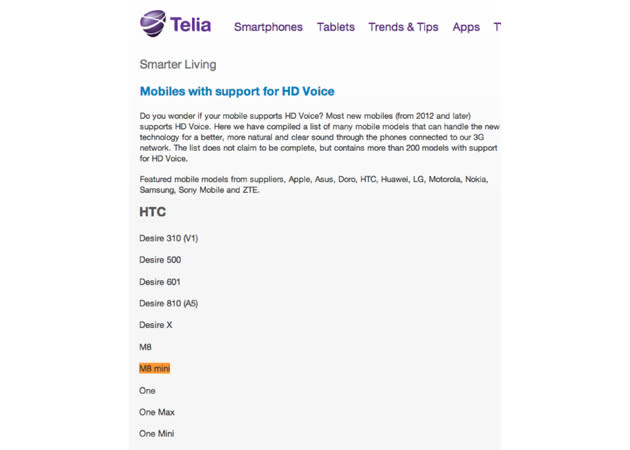 HTC has just released a new One smartphone, so it stands to reason that the company would give the One Mini a similar upgrade, wouldn't it? Sure enough, there's now a hint that such an update might be in the cards. Swedroid has spotted an "M8 mini" lurking in Swedish carrier Telia's list of HD Voice-capable phones. While the entry has vanished (as have other HTC models), the provider explains that it changed the list to reflect the phones it has "right now" -- not a confirmation of the tiny M8, but not exactly a denial, either. The listing didn't include any details of the phone, and there's no guarantee that it will launch soon, if it launches at all. However, HTC recently told us that its existing "product family strategy" has been working well; it would be shocking if the firm didn't have something like a One M8 Mini in development.

In this article: android, htc, m8mini, mobilepostcross, onem8mini, onemini, oneminim8, smartphone, sweden, telia
All products recommended by Engadget are selected by our editorial team, independent of our parent company. Some of our stories include affiliate links. If you buy something through one of these links, we may earn an affiliate commission.