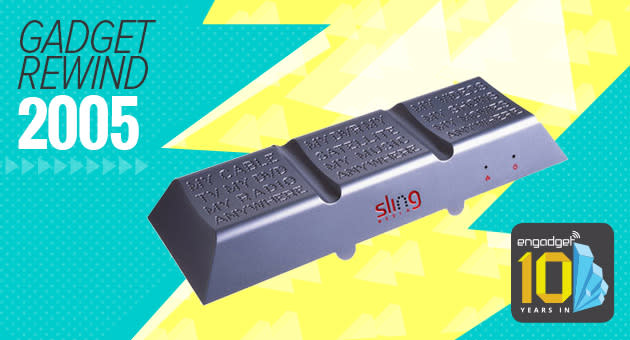 A company called Sling Media burst onto the scene in 2005 with a relatively new idea: give customers the ability to access their home cable and video services while they're traveling. Its "place-shifting" concept was embodied in its first device: the Slingbox. While you're on the road, this set-top-like box served to connect you to your very own TiVo recorded shows, media PC or cable and satellite TV services, provided you had a computer with Sling Media's software and an internet connection (preferably high-speed). The original design was somewhat unique, resembling an oversized candy bar (Sling calls it an "ingot"), and it was a clear favorite of both Engadget editors and readers, earning the title of best home entertainment device for 2005. At launch, the $250 price certainly wasn't cheap -- especially for standard definition only -- and it was markedly Windows-centric, excluding Apple users until its Mac compatible software arrived around 2007.

It was still a nascent market, but the Slingbox wasn't the only device that served the media-hungry, place-shifting early adopters. Sony had been marketing its LocationFree TV since 2004, which centered around a tablet used for wireless TV viewing, whether you were around the house or on the road. Also available at the time was Orb, a free media-streaming software that provided access to personal files and live TV, as long as you had Microsoft Media Center and a TV tuner installed on a connected home computer. Sling announced several new versions of the Slingbox in 2006, including the Tuner, AV and Pro models that aimed at improving the experience and offering more connections for multiple video sources on a single Slingbox. Today, Sling Media continues to deliver products that let you access your various media content while away from home, but in much greater definition and in a variety of funky, non-confectionary-based Slingbox designs.

Did you own a Slingbox? Add it to your Engadget profile as a device you had (or still have) and join the discussion to reminisce or share photos of your device with other like-minded gadget fans.
In this article: 10 years in, 10yearsin, av, entertainment, gadget rewind, gadgetrewind, gadgetry, gadgets, gear, hdpostcross, locationfreetv, media streamer, media streaming, orb, sling media, slingbox, Slingbox Classic
All products recommended by Engadget are selected by our editorial team, independent of our parent company. Some of our stories include affiliate links. If you buy something through one of these links, we may earn an affiliate commission.