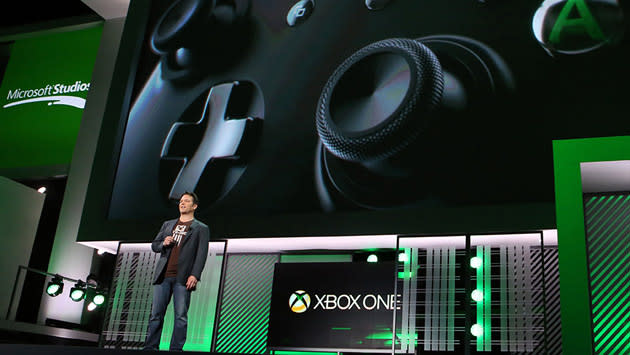 Microsoft CEO Satya Nadella announced the new head of its Xbox division this morning: Phil Spencer, longtime Microsoft Studios leader and Xbox game dude. In Spencer's initial letter to the legions of Xbox owners the world over, his approach comes across as scattershot. See for yourself:

"This past year has been a growth experience both for me and for the entire Xbox team. We've taken feedback, made our products better and renewed our focus on what is most important, our customer. Our mission is to build a world-class team, work hard to meet the high expectations of a passionate fan base, create the best games and entertainment and drive technical innovation. As we continue forward, this renewed focus and mission will be a foundational part of how I lead the Xbox program."

Given that, our first question to Spencer in a short phone interview this afternoon was one of clarification. With so many aspects of Xbox to oversee, where will he begin? "I'm gonna lead with a gaming focus and making sure that's where we're led. That's the North Star for the organization," he told us.

Beyond coming from a background at Microsoft Studios -- the name for a group of internal game-development groups at Microsoft -- Spencer's known for being game-focused. He reaffirmed this approach to us. "Winning with the gamer first is gonna be something that drives the organization," Spencer said. That's at the heart of his boss Nadella's Xbox reorganization.

With Spencer's title change comes a heap of new responsibility (due to an internal reorg). He's not just overseeing the Xbox One and Xbox 360, but also the entire ecosystem around the greater Xbox brand. That includes the following departments: Xbox, Xbox Live, Xbox Music, Xbox Video and Microsoft Studios. Spencer actually fought for all this oversight. In a discussion with Nadella, as well as Windows boss Terry Myerson and devices lead (former Nokia head) Stephen Elop, he had two stipulations. The first was the unification of Xbox under one umbrella; the second was a seat at the table with the likes of Myerson and Elop. "The Xbox team, the Xbox leader (me) sitting at the same leadership table as Terry (the Windows team leader, the Windows Phone OS team leader) really helps us look at gaming as that first-class citizen across all Microsoft platforms," he said.

More tightly, intelligently integrated Xbox services across more Windows platforms is something Redmond's struggled with for years. With Spencer, there's hope that someone with a real sense of the game industry can bridge the longstanding divide.

The next major beat for Spencer's Xbox will, naturally, be E3. He said we'll hear dribs and drabs before then -- some games will get launch dates; the first ID@Xbox games will arrive on the Xbox One -- but expect Xbox to once again lean on the all-important holiday sales season for its major game releases.

In this article: hdpostcross, interview, microsoft, microsoftstudios, philspencer, satyanadella, stephenelop, terrymyerson, xbox360, xboxlive, xboxone
All products recommended by Engadget are selected by our editorial team, independent of our parent company. Some of our stories include affiliate links. If you buy something through one of these links, we may earn an affiliate commission.