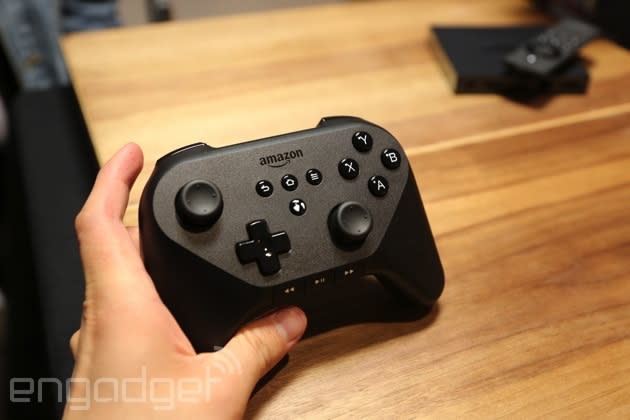 Surprising no one, Amazon's Fire TV gamepad is exactly what we already saw pass through the Brazilian FCC recently. In those pictures, however, it looked rough. In real life, thankfully, it's a much nicer piece of hardware. We've just spent 10 minutes playing Minecraft on a Fire TV at the event, and came away fairly impressed. It feels an awful lot like an Xbox 360 gamepad, most specifically the dual analog sticks. We've got more nuanced impressions beyond the break, so head below with us! Let's start with the analog sticks, as you'll interact with them more than anything else. First up, they feel solid. Again, they feel a lot like a stock Xbox 360 gamepad (directional bumps and all). Along the bottom, the d-pad also feels solid (though we'd anticipate not using it too often with Android games).

Moving over to the standard four face buttons, they're appropriately springy and responsive. We pushed A, and our Minecraft avatar leapt. We pushed forward; he moved forward. How it's supposed to work! Alright! The only issue we encountered was one that could be a symptom of Minecraft more than the controller: input lag. When looking around, there was a noticeable lag between analog stick input and action on screen. We'll have to test more before we call this out as a real issue, but it's an initial concern for sure.

In terms of triggers and shoulder buttons, the Xbox 360 gamepad comparison continues. Despite looking like an OnLive controller, the Fire TV gamepad feels most like the Xbox 360 standard.

The biggest differences, of course, are the pieces that are brand-new on Amazon's gamepad: Android buttons for Home, Back and Menu, as well as an Amazon Game Circle button. These buttons add unique functionality to the controller, enabling interaction with the Android fork running on Fire TV. Beyond that, several media controls rest along the bottom edge. They, uh, well, they function? They're not really tantamount to gameplay input, so we're kinda ignoring them for now.

Overall, the controller works well, feels good and costs ... a bit too much. For the meantime, you can use a wired Xbox 360 controller (naturally, via USB) as well as Nyko Bluetooth controller and Amazon Games head Mike Frazzini tells us he expects many more will support Fire TV in the coming months.

In this article: amazon, amazon game controller, firetv, firetvgamepad, gamepad, hdpostcross, wr26ur
All products recommended by Engadget are selected by our editorial team, independent of our parent company. Some of our stories include affiliate links. If you buy something through one of these links, we may earn an affiliate commission.