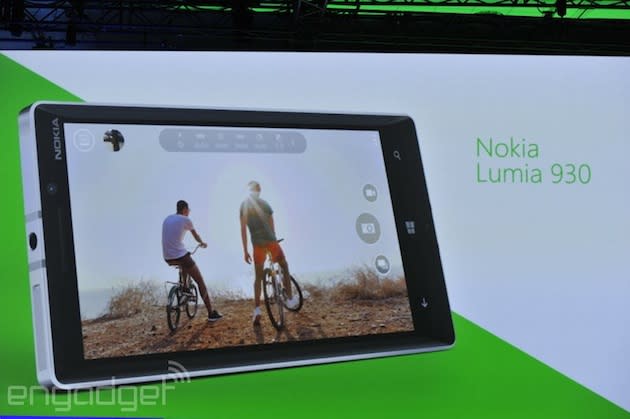 It appears that Nokia isn't coming to Microsoft's developer conference empty-handed. Though the acquisition is still pending, Nokia went ahead and brought in some new hardware anyway. This time, the phone maker has announced the Lumia 930, which is essentially the international version of the Lumia Icon. Which is to say, it features a 5-inch full HD display and a 20-megapixel PureView camera with a Zeiss lens. The camera is clearly the star of the show here: not only does it have optical image stabilization, but the phone also ships with a Creative Studio app that'll let you add Instagram-style filters to your snapshots. There's also a new feature called "Living Images" that can be weaved into Nokia's Storyteller application. Photos and videos are automatically sorted by time and location, and if you want to be all fancy, you can add music to the background when viewing the images.

Other features include four high-performance digital microphones, directional stereo recording on-board, wireless charging and a 2.2GHz Snapdragon 800 processor. Of course, it also runs the latest Windows Phone 8.1 firmware, which promises plenty of new goodies like a notification center (finally!) and Cortana, Windows' answer to Siri and Google Now. It also has something called "SensorCore," which apparently hooks into the Bing Health & Fitness app. Microsoft says the Lumia 930 will launch first in Europe starting in June, and will be available in Asia and other markets at a later date. It should land on more than 100 operators, priced at around $599. Unfortunately, US availability hasn't been announced, but that could be because we already have the Icon. In the meantime, have a peek at the video after the break to get your first taste of Nokia's latest flagship.

Update: You can check our hands-on of the Lumia 930 right here.

In this article: build, build2014, lumia930, microsoft, nokia
All products recommended by Engadget are selected by our editorial team, independent of our parent company. Some of our stories include affiliate links. If you buy something through one of these links, we may earn an affiliate commission.