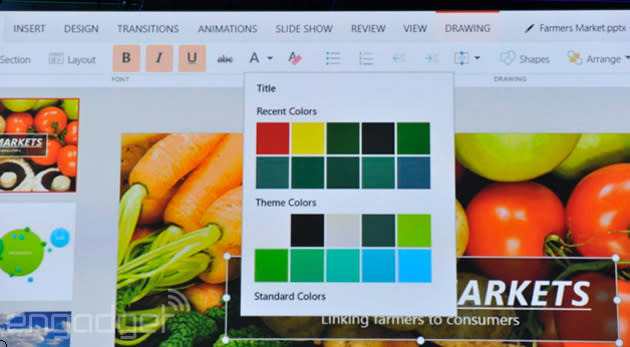 You didn't think Microsoft was going to launch Office for iPad without a Windows counterpart waiting in the wings, did you? Sure enough, Microsoft has just shown off its long-expected touch-native Office for Windows in beta form. The software shares a few interface elements in common with the iPad release, but not much -- this is clearly built for Windows tablets, with a more traditional layout that expands objects to make them finger-friendly. There will be plenty of gesture support, though. You can circle an item with your finger to highlight it, and you can pinch and swipe to get around much of the productivity suite. Unfortunately, the folks in Redmond aren't saying when this touch-ready Office will ship. The demo is just a preview of what to expect, so it could be a while before you're using the software yourself.

In this article: build2014, excel, microsoft, office, outlook, powerpoint, software, touch, windows, word
All products recommended by Engadget are selected by our editorial team, independent of our parent company. Some of our stories include affiliate links. If you buy something through one of these links, we may earn an affiliate commission.