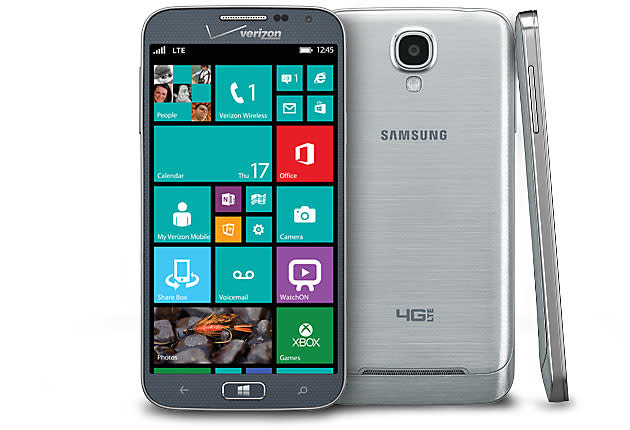 With Windows Phone 8.1 now free, we may start seeing more announcements like this: Verizon's just put the Samsung ATIV SE handset up for pre-order. As we saw in an earlier leak, it's essentially a high-spec Galaxy S4 with Windows Phone 8 (not 8.1) instead of Android. Though that's been superceded by the Galaxy S5 on Android, the internals are still not too shabby, especially for a WP8 handset: a 2.3GHz Snapdragon 800 quad-core CPU, LTE, 2GB of RAM, a 16 13-megapixel camera and a 2,600mAh battery. Naturally, Samsung's also thrown in its own goodies whether you want them or not -- though some, like the TV remote control app, actually look useful. Verizon says it'll ship them out by April 12th at the latest and, if you go for one at $200 on a two-year contract, you'll even get a second for free.

In this article: ATIVSE, mobilepostcross, RemoteControl, samsung, verizon, WindowsPhone8
All products recommended by Engadget are selected by our editorial team, independent of our parent company. Some of our stories include affiliate links. If you buy something through one of these links, we may earn an affiliate commission.