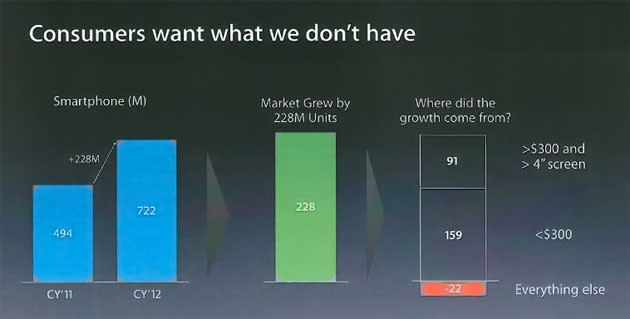 The ongoing Apple-Samsung trial is unearthing some interesting behind-closed-door secrets on both sides. Something we hadn't seen in the preceding legal tussles however, and presented by Recode, was a handful of slides from an Apple internal meeting in April 2013 regarding its plans for 2014. Alongside the slowing growth of iPhone sales, the research noted that overall smartphone growth was from cheap and large (well, larger than the current iPhone) devices -- both of which Apple had nothing to compete with. As the slide put it: "Consumers want what we don't have."

The slide also includes some other reasons for concern, including the carriers' "strong interest in capping iPhone" sales because of its already-high market share, a tough subsidy premium and some (not mentioned) "unfriendly" policies -- consider that lack of carrier-sanctioned bloatware on your iPhone. Apple also admitted that the mobile competition had also "drastically improved their hardware and in some cases their ecosystems," while at the same time, some Android phone-makers were spending "obscene" sums on advertising or carriers to gain traction. Now, which company could Apple possibly mean?

In this article: apple, google, lawsuit, legal, mobilepostcross, patent, patent infringement, samsung, slide to unlock
All products recommended by Engadget are selected by our editorial team, independent of our parent company. Some of our stories include affiliate links. If you buy something through one of these links, we may earn an affiliate commission.