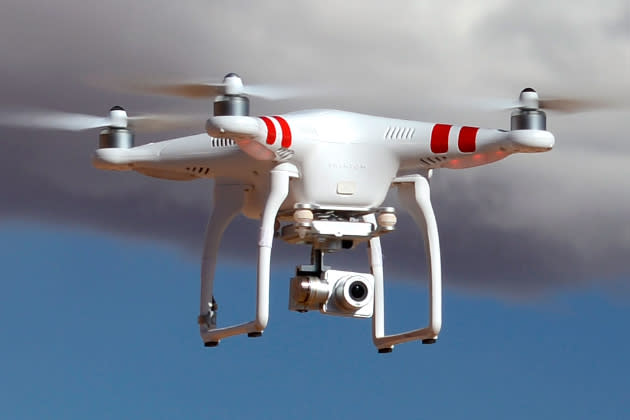 It was just this January that we tested DJI's Phantom 2 Vision drone, a $1,199 quadcopter with an integrated 14-megapixel/1080p camera and tilt-axis gimbal. Now at NAB, DJI's back with a "plus" version of its airborne craft. The refreshed gadget, which retails for $100 more than its predecessor, includes a new three-axis gimbal (compared to single-axis stabilization) for smoother captures, more than double the WiFi communication distance (700 meters, or about 2,300 feet), a 50-percent boost in maximum flight speed (to 15 meters or 50 feet per second) and a 90-degree tilt that lets you shoot subjects directly below.

There's also an integrated GPS system that enables you to set an autonomous path or keep the Phantom in the same spot in winds of up to 25 miles per hour, while the DJI Vision app lets you preview footage and access altitude, distance and battery strength during shoots. Finally, DJI is releasing a firmware update for all Phantom drones that lets pilots avoid flying near airports or user-generated no-fly zones. Availability remains TBA, but expect to drop $1,299 for your Phantom 2 Vision+ once it's ready to ship.

7
In this article: dji, drone, drones, nab, nab2014, Phantom, video, vision
All products recommended by Engadget are selected by our editorial team, independent of our parent company. Some of our stories include affiliate links. If you buy something through one of these links, we may earn an affiliate commission.