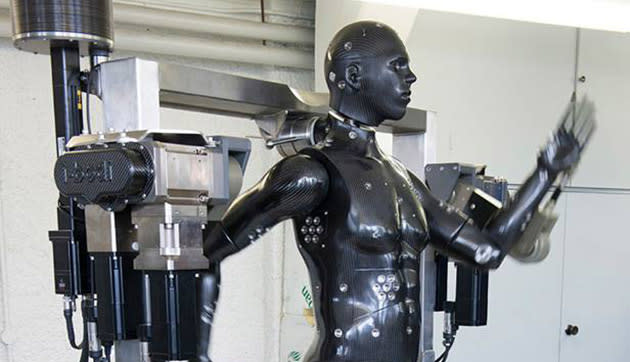 Boston Dymanics' Petman now has serious competition in the "eerie human-like robots" category, courtesy of the UK's Ministry of Defence. This new contender is a £1.1 million ($1.8 million) masterpiece called Porton Man, named after the Defence Science and Technology Laboratory in Porton Down, Wiltshire. If you're expecting a killing machine designed for the battlefield, though, you'll be sorely disappointed. The Porton Man will actually be used for tests in the development of new and lighter protective equipment for the military. Remember how Petman donned and tested a hazmat suit at one point that made it even creepier than usual? It'll be doing something like that.

While the ministry just announced the robot, it's actually the project's second model. The first one was a hefty 176-pound machine that was hard to lug around, so its developers at Buckingham company i-bodi took cues from Formula 1 race cars and made a tougher, lighter 30-pound version using carbon composite parts. That shaved off most of Porton Man's weight, making it easy to bring it from one testing room to another to be subjected to various hazardous conditions such as exposure to chemical warfare agents. Of course, until it can strut to Stayin' Alive with as much as style as Petman does, it's still a step behind.

In this article: carboncomposite, military, petman, portonman, Robots, uk, UncannyValley
All products recommended by Engadget are selected by our editorial team, independent of our parent company. Some of our stories include affiliate links. If you buy something through one of these links, we may earn an affiliate commission.