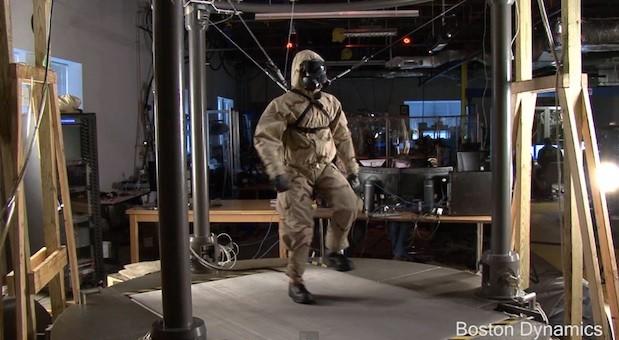 Boston Dynamics has been releasing video after video of its Petman humanoid robot performing a variety of tests, but something has always been missing: clothes. No longer. The company has today released a new video that demonstrates the robot can not only wear clothes, but make you never look at a hazmat suit the same way again. As the company notes, the testing isn't just for Petman -- thanks to some DoD funding, it's using the robot to test suits like this in hazardous conditions, with an array of sensors on the robot itself able to detect chemicals leaking through the suit. Sit down, and head on past the break to see the video for yourself.

Update: Commenter PapaDerp has kindly provided proof that Petman is able to groove just as well with a hazmat suit on as he is out of one. Turn on your speakers and click here to make your Friday a bit better.

In this article: bostondynamics, clothes, humanoid, petman, robot
All products recommended by Engadget are selected by our editorial team, independent of our parent company. Some of our stories include affiliate links. If you buy something through one of these links, we may earn an affiliate commission.