Delta’s fully biometric terminal is the first in the US 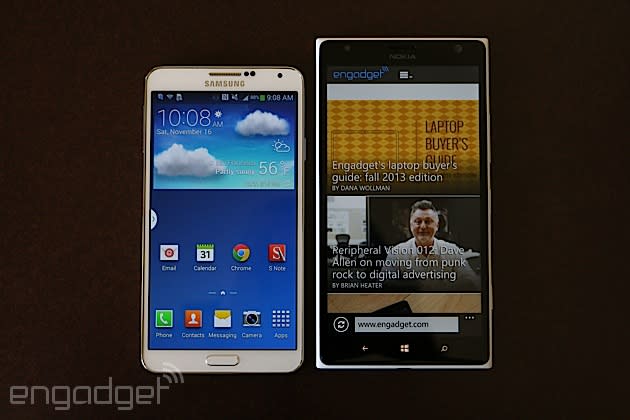 The Lumia 820 just reached EOL at Delta. The airline's 20,000 flight attendants will be stepping up to the significantly larger Nokia Lumia 1520 "phablet" come this fall, matching the larger form factor that AA currently has in the sky. The 1520s will include flight manuals and can support on-board sales, letting employees process credit card payments on the fly. The move will also enable flight attendants to ditch the 500-page, five-pound manuals they're used to bringing on board, saving Delta more than $1 million each year in fuel and printing costs. Meanwhile, pilots are still on track to receive Microsoft's Surface 2 -- that process should be complete by the end of 2015. The 1520 will make its way on board much sooner, though. Delta is expecting to issue the Windows Phone 8.1 handsets beginning in October, with all FAs expected to have one in hand by the end of the year.

In this article: delta, DeltaAirlines, lumia, lumia1520, phablet, transportation
All products recommended by Engadget are selected by our editorial team, independent of our parent company. Some of our stories include affiliate links. If you buy something through one of these links, we may earn an affiliate commission.