A real suicide bomb detector should arrive this year

Optical nanotech sensor can sniff out bad food and explosives 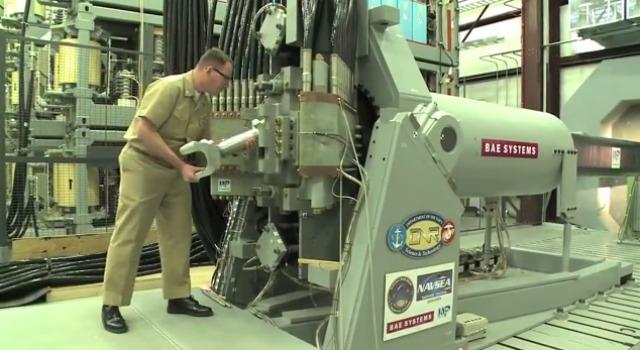 The Navy announced plans today to deploy an electromagnetic railgun that can do some epic damage. Set to go into testing on one of Navy's joint high speed vessels (JHSV) in 2016, the gun uses Lorentz Force to "rapidly accelerate and launch a projectile between two conductive rails." The result is a gun that can shoot a ton farther than a traditional weapon. Even better, it can maintain kinetic energy while it's in flight, making it so it doesn't need a lot of explosives on board to do some damage when it gets to the car, building, or other ship you're trying to blow up. The Navy's chief engineer, Rear Adm. Bryant Fuller says the gun will "allow us to effectively counter a wide-range of threats at a relatively low cost, while keeping our ships and sailors safer by removing the need to carry as many high-explosive weapons." JHSV's aren't used for combat, so the railguns will be on their way to some TBD boats soon. For now, you can see them in action in the official Navy video below.

In this article: explosives, gun, Lorentz force, navy, railgun, SciTech, video
All products recommended by Engadget are selected by our editorial team, independent of our parent company. Some of our stories include affiliate links. If you buy something through one of these links, we may earn an affiliate commission.