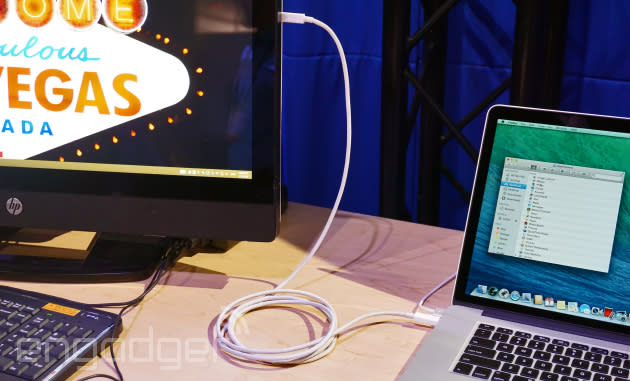 Intel's Thunderbolt 2 connectivity standard is getting an update here at NAB 2014 with the addition of Thunderbolt Networking. Put simply, this new feature will let you pair computers with a Thunderbolt cable, with throughput of 10 Gbps between the two machines for super-fast file-sharing. Additionally, thanks to a driver currently available on OS X Mavericks, you'll be able to connect a Mac to a PC (or Mac to Mac) with the new technology. Of course, the ability to quickly transfer data between PCs is important to filmmakers and photographers -- especially those working with 4K footage. Intel's on hand here with a demo that will likely mimic the workflow of the media types at this show.

Update: We dropped by Intel for a transfer speed demo, which you'll find after the break. Additionally, Intel clarified that Thunderbolt Networking has been available in Mavericks for some time, but this upcoming update will enable connectivity between Macs and PCs, as well as two Windows machines.

In this article: hands-on, Intel, NAB, nab2014, thunderbolt, thunderbolt 2, thunderbolt networking, video
All products recommended by Engadget are selected by our editorial team, independent of our parent company. Some of our stories include affiliate links. If you buy something through one of these links, we may earn an affiliate commission.