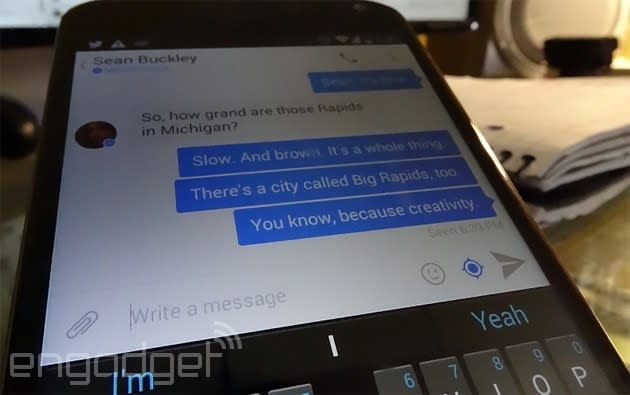 Facebook has been testing new features inside its standalone Messenger app for months, and now the social network is pulling the chat feature from its primary offering. The outfit has included messaging functionality in its main apps for some time now, but late last year, Mark Zuckerberg announced that the company would eventually pull the plug. For a few months now, users that have both apps installed have been linked out to the Messenger software when accessing chat in the regular ol' version. The switch will take place over the next two weeks, and TechCrunch reports that Facebook has begun notifying users of the change.

"The reason why we're doing that is we found that having it as a second-class thing inside the Facebook app makes it so there's more friction to replying to messages, so we would rather have people be using a more focused experience for that," Zuckerberg told TechCrunch in November. This means you'll have to download that Messenger app if you want to keep that direct line of communication open with your Facebook pals, unless you have an Android device that can't run it, use the mobile site or keep your talks confined to the outfit's Paper reader.

In this article: app, apps, chat, facebook, facebookmessenger, messenger, mobilepostcross, software
All products recommended by Engadget are selected by our editorial team, independent of our parent company. Some of our stories include affiliate links. If you buy something through one of these links, we may earn an affiliate commission.