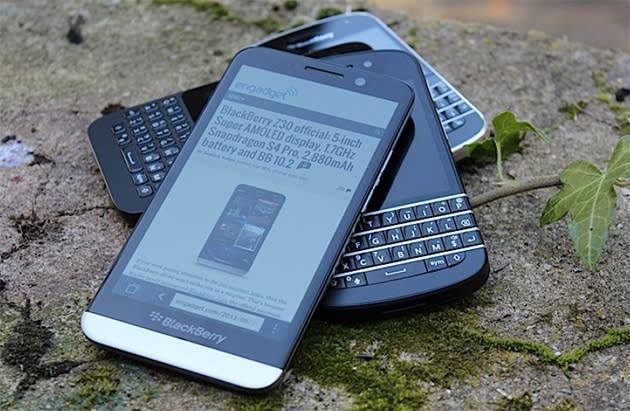 BlackBerry's future as a phonemaker came into question yesterday when Reuters reported that CEO John Chen would consider selling its handset division. Naturally, the company sought to set the record straight... with a blog post from Chen himself published earlier today.

"I want to assure you that I have no intention of selling off or abandoning this business any time soon," he wrote, noting that his comments were taken out of context. So what exactly did he mean? Chen quietly crashed a reporter's roundtable with BlackBerry enterprise chief John Sims this morning (apparently in search of a cup of coffee) -- here's what he told us about the Reuters interview and the future of BlackBerry's phones.

But they -- some people at Reuters loved that last statement. That became the big news. There was no news here. The only news is that we're committed to the handset business, and we're going to make it work."

Here's the thing about Chen: He's a pragmatist. He's confident that the company can make money while making phones, but he admits that he'd have to rethink that stance if BlackBerry can't turn its handset fortunes around. That's it. Sort of a no-brainer, right? Sims added that there isn't really a point of no return in this situation, either -- BlackBerry will keep monitoring the situation and cranking out phones until it's clear it doesn't make any more sense to. That milestone could take months, maybe years to hit. Maybe BlackBerry won't hit it at all, if they get sales up and unit costs down.

There's something a little troubling about the fact that plenty of people took the headline at face value and just ran with it. To many, BlackBerry has already died; its fight already lost. That's not entirely fair -- there are still at least a few handsets barreling down the pipeline, and there's still over $2.5 billion tucked away in Waterloo's coffers. But it is possible that the nature of the relationship consumers have built with BlackBerry -- one based on having a physical thing in their pockets -- may eventually have to change, not that anyone particularly wants it to. And that's the truth.
In this article: blackberry, johnchen, mobilepostcross, reuters
All products recommended by Engadget are selected by our editorial team, independent of our parent company. Some of our stories include affiliate links. If you buy something through one of these links, we may earn an affiliate commission.