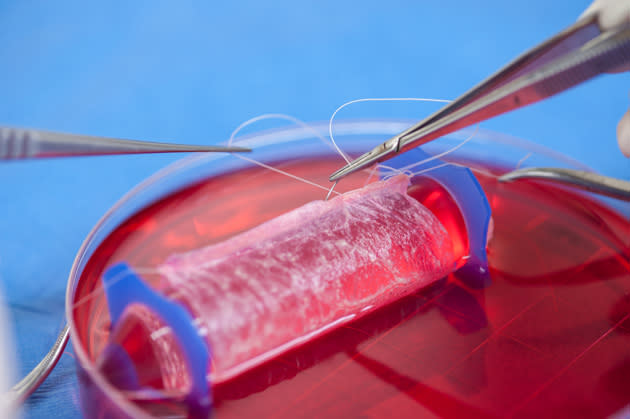 We've seen all kinds of regenerative medicine transplants over the past few years, including windpipes and the larynx. Now, a research team at Wake Forest Baptist Medical Center in North Carolina has reported that it implanted laboratory-grown vaginas in patients born with Mayer-Rokitansky-Küster-Hauser (MRKH) syndrome: a rare genetic disorder that results in the vagina and uterus being underdeveloped or missing entirely.

Girls ranging in age from 13 to 18 underwent surgery during the trial and eight years after, the organs continue to show normal function. "This pilot study is the first to demonstrate that vaginal organs can be constructed in the lab and used successfully in humans," said Anthony Atala, M.D., who led the research team. "This may represent a new option for patients who require vaginal reconstructive surgeries."

The structures of the lab-grown organs were built using cells taken during a biopsy of each patient's external genitals. From there, cells were extracted, expanded and then hand-sewn into a vaginal shape, uniquely made for each person. After about six weeks, the organs were implanted during surgery, with the body gradually replacing the engineered structure with a new organ. What's life like for the patients? Well, they've reported normal sexual function following the procedure, with desire and pain-free intercourse now being part of their lives. Researchers say that the same procedure could be used to treat those with vaginal cancer or other injuries. NewScientist has an interview with one of the patients, which you can read here.

In this article: implant, regenerativemedicine, science, vagina, vaginalimplant, wakeforest
All products recommended by Engadget are selected by our editorial team, independent of our parent company. Some of our stories include affiliate links. If you buy something through one of these links, we may earn an affiliate commission.
Share
Tweet
Share