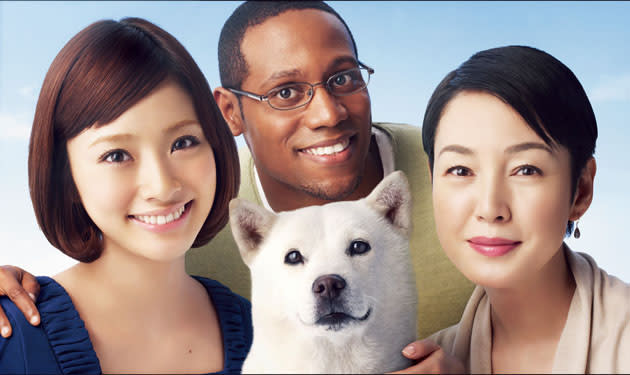 With its Framily plans, Sprint wants you to convince friends, family and possibly outright strangers, to join the carrier and chip a few bucks off your bill. It's even created a new ad series to show just how broad its definition of "framily" is. The dad's a hamster, while the daughter speaks only in French, accompanied by three animated birds. However, Sprint's Frobinsons have to go a long ways to match the sheer offbeat-ness of Softbank's answer to "framily," the Shiratos in Japan.

That framily consists of a talking dog as patriarch, a wife who has the real power, a daughter played by popular actress Aya Ueto and a non-Japanese son played by Dante Carver (a Softbank commercial mainstay). The core family unit is then augmented by bit-parts from 'Uncle' Quentin Tarantino, Manchester United's Shinji Kagawa (and his dolphin father) and Tommy Lee-Jones, the live-in-maid-from-space. Ad-Age wasn't a fan, but we hope the Frobinsons are just getting started. We've pulled together a few English-subtitled Softbank ads and added them, alongside Sprint's interpretation, to the video gallery below.

The connection here is that the founder of Japanese carrier Softbank bought Sprint. CEO Masayoshi Son has apparently brought the same advertising tactics that helped Softbank grow from a relatively small carrier to Japan's top three, sparring for dominance. The family, especially the talking dog, has helped the company's visibility hugely, ensuring Softbank became a talking point. (Normal people don't talk about phone carriers much, unless there's something, or someone, to talk about.) In fact, over the last few years, other ad campaigns in Japan "haven't even come close" to the popularity of Otou-san (Dad) and his weird adventures in space, on holiday, running for political office, or heading in the winning goal.

In this article: advertisement, advertising, dogs, framily, framily plan, mobilepostcross, otousan, Quentin Tarantino, shirota, shiroto, softbank, sprint, talking dog, talkingdogs, Tommy Lee Jones, video
All products recommended by Engadget are selected by our editorial team, independent of our parent company. Some of our stories include affiliate links. If you buy something through one of these links, we may earn an affiliate commission.