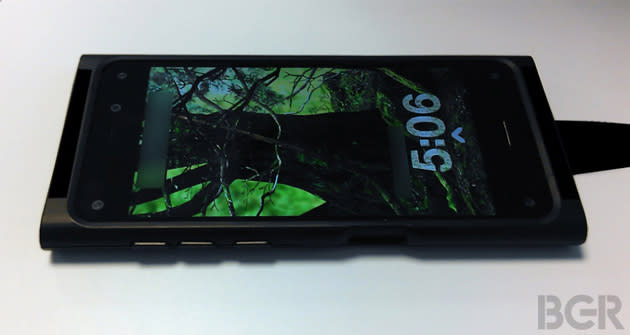 Rumors of an Amazon-made phone are nothing new, but today the rumors enter reality more firmly: what you see above is what BGR claims is the Amazon's first phone. "Whoa, that's super ugly!" you might be saying. Cool it, that's just an enclosure around the device itself preventing prying eyes (like our own) from seeing the actual design. The good news is we can still learn a few things about the device without the enclosure removed: five cameras up front (reportedly a sixth out back) and a trio of buttons along the left side handle power and volume. The screen is reportedly of the 4.7-inch variety -- which lines up with previous rumors -- and puts Amazon's first phone on the same scale as Motorola's Moto X (among others).

Before we move on, we should probably address that whole six cameras thing, huh? Well, the rear one is a standard phone camera for taking photos, and apparently one of the five on the front is also just a standard camera. The four other face cameras, though, are apparently for something especially unique: the phone's 3D interface. All those cameras reportedly enable the phone to track the position of your head and where you're looking, thus enabling glasses-free 3D from any angle. BGR says the four face cams are low-power infrared sensors.

So, what's powering that effect besides cameras? 2GB of RAM and an unnamed Qualcomm Snapdragon processor, apparently. Rather than going 1080p, the handset is also said to push 720p (also similar to the Moto X).

If that's not enough, the report also says that a less flashy, more affordable version will arrive this year as well. That's two Amazon phones potentially leaked without Amazon acknowledging or even teasing either. Don't expect shock on our faces when an ambiguous event invite shows up in the next few weeks.

In this article: amazon, amazonphone, mobilepostcross, phone, poll, wedgies
All products recommended by Engadget are selected by our editorial team, independent of our parent company. Some of our stories include affiliate links. If you buy something through one of these links, we may earn an affiliate commission.