Fon brings its WiFi-sharing service to the US 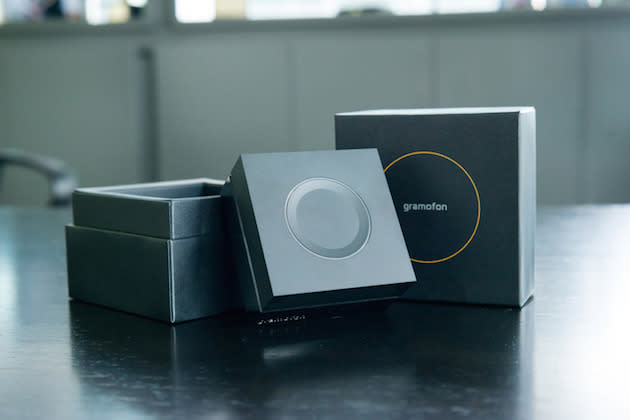 Recognizing that there's no shortage of set-top boxes and smart speakers capable of streaming music around your home, global WiFi provider Fon has decided it wants to do things a little differently. Billed as a new "modern cloud jukebox," the company today introduced the Gramofon, a stylish little box that is actually part music streamer and part WiFi router.

Here's how it works: you wire up your Gramofon to your stereo system or speaker system. Then you connect the box to the internet via its built-in ethernet port or using your existing WiFi connection. It's then a case of connecting your iOS or Android device to the Gramofon's new WiFi network, allowing you to stream Spotify or listen to its own free radio service powered by WahWah. Because the Gramofon serves as a WiFi router, you could also extend the range of your existing wireless network and control playback from the weaker spots in your house. You may also wonder where the jukebox element comes in. Well, Fon's trying to push a social element with Gramofon, using Facebook to control who can connect and also control the music. If you're virtual friends with that person, they'll be able log in via Facebook, get internet access and play Spotify tracks using their own phone. Fon hopes to add support for additional streaming services including Google Play Music, Soundcloud, Amazon Music and others in the future.

Fon says it has completed most of its research and development, but it isn't quite ready to open Gramofon sales to the public just yet. Instead, it's taken to Kickstarter to gauge interest and raise $250,000 to help fund the production of the first 6,500 units by July. To incentivize customers, it'll initially offer Gramofon pre-orders for a discounted price of $30 for a black model and $40 for a white version. After a limited time, they'll rise to $50 and $60 respectively.

In this article: fon, gramofon, hdpostcross, hub, jukebox, kickstarter, music, streaming
All products recommended by Engadget are selected by our editorial team, independent of our parent company. Some of our stories include affiliate links. If you buy something through one of these links, we may earn an affiliate commission.