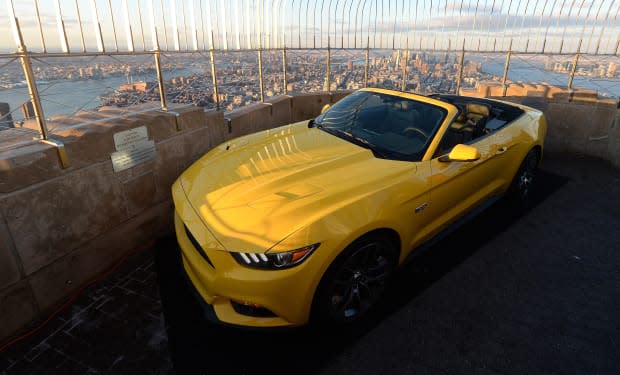 Ford is marking the launch of the 2015 Mustang in the same way it did for the original 50 years ago -- by putting one at the top of the Empire State Building. The company has partnered with auto supplier DST to cut its latest sports car into pieces and reassemble it on the building's observation deck, 86 floors up. You can check out the vehicle for yourself if you visit the New York City skyscraper no later than April 17th.

The feat was considerably more involved this time around. In addition to having to split up a car full of electronics that weren't present in the 1965 model, the team had to get the vehicle up the elevators and assembled in less than six hours. DST's workers say they had to practice the operation like a race car's pit crew; even the slightest delay could have created problems. The effort ultimately amounts to a publicity stunt, but it's also an impressive technical feat that few (if any) will get to see again.

In this article: car, dst, empirestatebuilding, ford, mustang, newyorkcity, nyautoshow, nyc, transportation, vehicle
All products recommended by Engadget are selected by our editorial team, independent of our parent company. Some of our stories include affiliate links. If you buy something through one of these links, we may earn an affiliate commission.