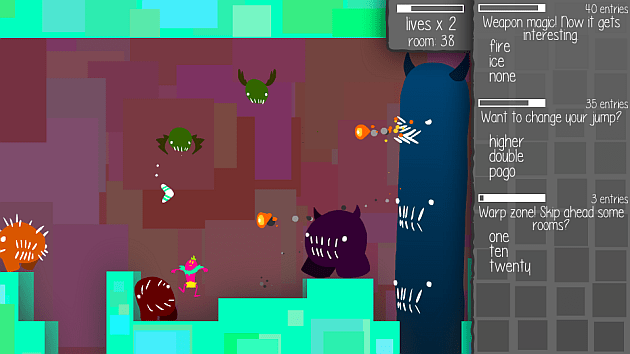 When some 1.1 million people played Pokémon together via Twitch's game-broadcasting service, developer Studio Bean must've gotten inspired. Choice Chamber takes the idea of the audience deciding what happens onscreen to a new level and injects Twitch chat into the game's DNA; here, the peanut gallery has a direct impact on the player's progression. As you make your way through a series of randomly generated rooms, the audience (people watching you broadcast via Twitch, of course) takes a series of polls that alter the game's flow. It's a lot like playing as dungeon master with your Dungeons and Dragons crew, but with a 21st century twist. As cool as voting on what weapon the player gets, or summoning a giant fist that wipes across the screen to obliterate a boss monster sounds, though, the project is only halfway to its $30,000 Kickstarter funding goal. With four days left in the campaign, Twitch has announced that it'll step in and match the funds needed to finish the game.

This marks the first time that the streaming outfit has played an active role in game development, and, if it's a hit, chances are that we could see more like it in the future. If you want a taste of controlling a game without the hassles of actually playing one yourself, the arcadey Dead Nation on PS4 and the upcoming Daylight use Twitch interaction, too. Not into zombies or horror? Well, Twitch is still playing Pokémon.

In this article: broadcasting, choicechamber, gaming, hdpostcross, kickstarter, LiveStream, studiobean, twitch, twitch.tv
All products recommended by Engadget are selected by our editorial team, independent of our parent company. Some of our stories include affiliate links. If you buy something through one of these links, we may earn an affiliate commission.