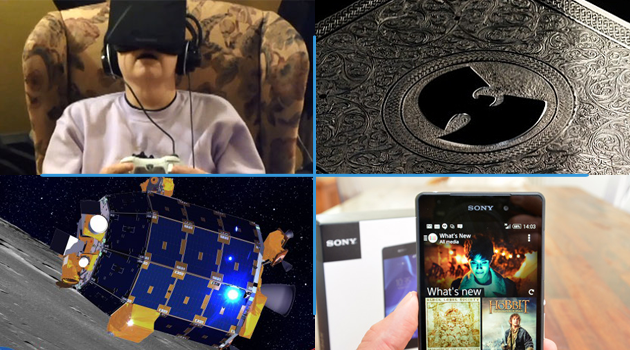 The Xperia Z2 is just as waterproof as the original Z1 and it packs a slightly larger display and better battery life -- not to mention it's several grams lighter. But at 5.2-inches, Sony's curveless flagship might be too big for its your britches. Sure, exploring the world of Minecraft with an Occulus Rift is fun, but pure entertainment isn't the VR headset's only use. Roberta Firstenberg may be a home-bound terminally ill cancer patient, but Oculus let her take a virtual trip to Tuscany before she passed. Yes, the Wu-Tang Clan is selling the only copy of its upcoming album, Once Upon a Time in Shaolin, for $5 million. Don't have that kind of cash? Not to worry, a group of fans put together a Kickstarter in hopes of putting its latest jams in the hands of ordinary people. NASA just crashed a satellite into the moon on purpose

Remember NASA's LADEE satellite? Well, it's no more. According to the agency, the vehicle didn't have enough power to maintain orbit... so they gave it a proper galactic burial and slammed it into the lunar surface.

In this article: kickstarter, LADEE, moon, nasa, oculus rift, sony, tdr, vr, wu tang clan, xperia z2, z2
All products recommended by Engadget are selected by our editorial team, independent of our parent company. Some of our stories include affiliate links. If you buy something through one of these links, we may earn an affiliate commission.