Firefox has a new side-by-side tab feature for multitaskers

'Far Cry 5' season pass takes you to Mars and Vietnam

The first 'Destiny 2' expansion will reintroduce players to Osiris 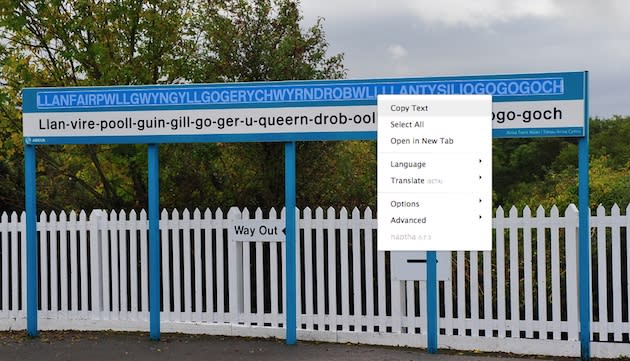 What would you say if we told you that it's possible to copy, translate, edit and even erase the text inside any image you find on the internet? Well, you can, and it's a lot easier than you might think. All it requires is a new browser extension, called Project Naptha, made by developer Kevin Kwok. It uses a number of optical character recognition (OCR) algorithms, including libraries developed by Microsoft and Google, which quickly build a model of text regions, words and letters from nearly any image.

Once installed, you simply hover your cursor over available image text and select it. Using its built-in tools, you can do a number of things: Firstly, you can copy your selection. This is great if you've been emailed a scanned document or a screenshot of an error message. For instance, instead of jotting things down and manually typing it back into to Google, you can simply copy and paste the output directly into your search bar. If an image includes text you don't understand, Naptha also supports numerous translation services, allowing you to decode a previously unintelligible language (at least to you) on the fly. However, perhaps the extension's most impressive feature is its ability to edit and remove text. Using a technique similar to Photoshop's "Content-Aware Fill" feature called "inpainting," Naptha captures each of the independent colours from regions around the text and intelligently fills the space where it used to be. It's not perfect, but it certainly beats having to open a dedicated image editor.

Kwok says he's consistently working on expanding the project, which will include bringing it to other browsers like Mozilla Firefox. Right now, not all images allow you to edit words within them, although the developer has said he hopes to include support for vertical text in the future. Project Naptha is available now for free via the official website or Google's Chrome Web Store.

In this article: addon, browser, chrome, extension, google, ocr, project naptha
All products recommended by Engadget are selected by our editorial team, independent of our parent company. Some of our stories include affiliate links. If you buy something through one of these links, we may earn an affiliate commission.