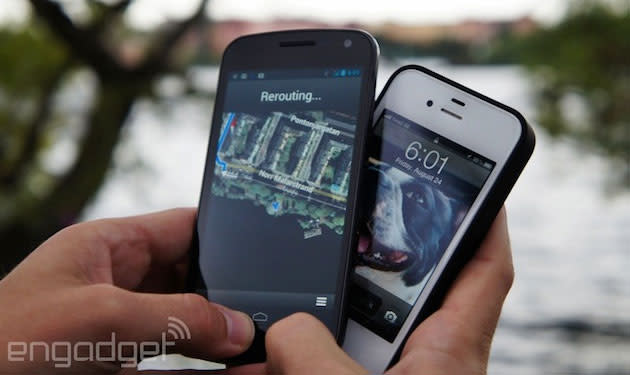 Confirming what a lot of us thought already, Google is more than a little interested in Apple and Samsung's continuing court battle. New evidence revealed by Apple's lawyers outlines emails from Google that offered to foot some of the damages (if Samsung lost), as well as cover part of the legal costs in the current trial. This would cover two of the five patents that Apple is fighting over. Google lawyer James Maccoun confirmed that it would help Samsung as part of the Mobile Application Distribution Agreement, the framework that allows Samsung to use Google-made apps on its Android devices. According to Maccoun's taped deposition: "As I read it, Google's essentially offering to defend Samsung to the MADA and does offer to defend some [patent] claims."

Apple is looking to claim $2.2 billion from Samsung over five patents, while in return (you know how these things go), the Korean company is claiming a smaller $7 million for infringing two of its patents. Samsung had already stated that four of Apple's patents are covered by Google's Android OS, and has called in engineers to testify to that effect. The details of exactly how much cash Google will be willing to offer up haven't been disclosed, although it's likely hoping it won't have to pay a thing.

In this article: android, apple, google, legal, mada, patent, samsung
All products recommended by Engadget are selected by our editorial team, independent of our parent company. Some of our stories include affiliate links. If you buy something through one of these links, we may earn an affiliate commission.