Facebook launches Voting Information Center for the 2020 US election 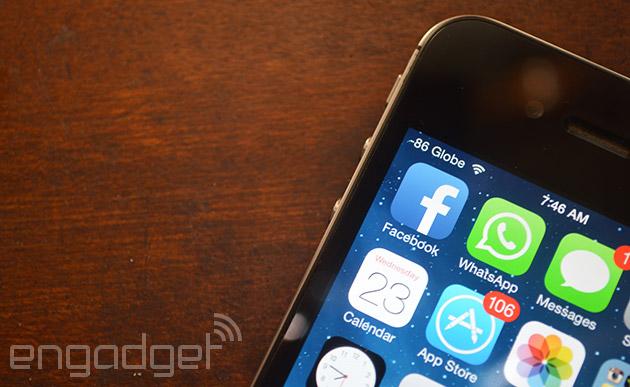 Some companies lose their following after an acquisition, but not Whatsapp -- apparently, its userbase just continued to grow after Facebook bought it for $19 billion. The FB-owned entity has revealed that it now has 500 million active users, up 50 million from the time the social network snapped it up. According to Whatsapp CEO Jan Kuom, the app has seen the fastest growth in Brazil, India, Mexico and Russia in recent months. Kuom didn't mention whether the buyout helped boost Whatsapp's influence in those regions, but it's worth noting that Brazil, India and Mexico had some of the biggest Facebook user numbers in 2013, according to a statistics analyst. He also mentioned that people have been sharing over 700 million photos and 100 million videos per day over the app.

With growth like this, we wouldn't be surprised if it's true that providers everywhere have collectively lost out on $33 billion due to the popular messaging app. Unfortunately, the CEO didn't have anything to share about the VoIP feature for iOS, so the Whatsapp faithful will have to wait a bit more.

In this article: facebook, mobilepostcross, users, whatsapp
All products recommended by Engadget are selected by our editorial team, independent of our parent company. Some of our stories include affiliate links. If you buy something through one of these links, we may earn an affiliate commission.