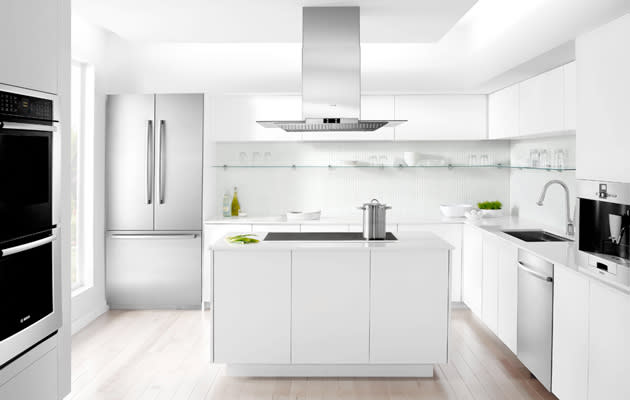 Until today, we thought that Bosch's HomeConnect system would only let you turn your washing machine on if you had Bosch (or Siemens)-branded hardware. Turns out, however, that the company wants to be the middleman for all of your internet-connected appliances. At an event in Turkey, a spokesperson revealed that HomeConnect will become a platform that'll let you control all of your kitchen gadgets, no matter which company makes them. That way, instead of having a smartphone chock-full of apps, each one dedicated to a separate appliance, it could all be run from HomeConnect.

On the downside, such controls would be limited to turning the units on and off, as well as alerts if something goes wrong. Then there's the fact that we don't know what other manufacturers would want to contribute, rather than locking users into their own, proprietary, systems. Still, Bosch's market research has found that, unlike in the smartphone business, people often buy appliances from a wide variety of manufacturers, so a unified control system makes a lot of sense. According to Bosch, the HomeConnect platform will launch in Germany on iOS in September, coming to Android at some point in 2015. All we need now, of course, is a robot that'll go through our laundry and hang it up when it's done.

In this article: Bosch, HomeConnect, IFA 2014, Internet of Things, Siemens
All products recommended by Engadget are selected by our editorial team, independent of our parent company. Some of our stories include affiliate links. If you buy something through one of these links, we may earn an affiliate commission.