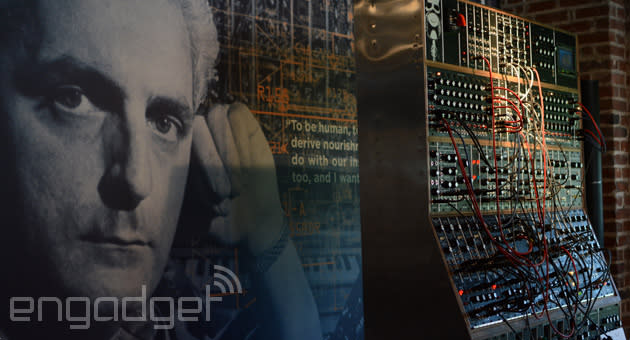 How do you celebrate the 50th anniversary of Bob Moog's the first voltage controlled synthesizer? By completely recreating it five decades later, of course. The folks at Moog revealed the new Emerson Moog Modular System this weekend at Moogfest. This research and construction project took three years to complete, culminated with the building of the 2014 edition of Keith Emerson's Moog Modular System (Emerson being of Emerson, Lake & Palmer fame). Using the original schematics, hand-soldering, traditional wiring techniques and even photo-etching the aluminum front panels (a much less common process these days), engineers were able to remake the highly customized instrument from the internals to the aesthetics. Heck, Emerson even used the unit in what he said may be one of his last live performances Thursday night. What's more, Moog plans to build "a handful" of these new Emerson systems and offer them for purchase. As you might expect, you'll have to call the factory for pricing which likely means it's a bit outside of nearly all price ranges. Early reports have the list price at $90,000, but Moog has yet to announce a figure. While you're sorting your funds though, we were able to take a look in person, and you can scroll through those images in the gallery below. And you can hear Emerson's original modular system in the tune "Lucky Man." 13
In this article: emersonmodularsystem, keithemerson, moog, moogfest, moogfest2014, music, synth, sythesizer
All products recommended by Engadget are selected by our editorial team, independent of our parent company. Some of our stories include affiliate links. If you buy something through one of these links, we may earn an affiliate commission.