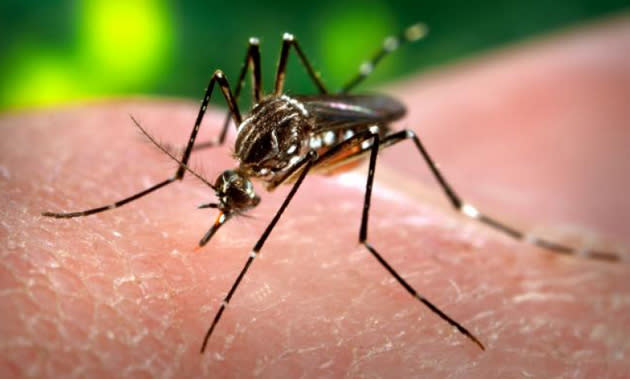 With the World Cup just six weeks away, Brazilian authorities have approved the widespread, commercial release of a strain of mosquito that has been genetically reprogrammed to wipe out its own species. These Aedes aegypti mosquitoes are a major carrier of dengue fever, and bed nets are useless against them because they bite during the day. While some have experimented with using lasers and other techniques to mass-kill the disease-carrying bugs, Brazil's preferred solution begins in the lab: Male mosquitoes are given a deliberately flawed gene and then released into the wild so that they can reproduce, at which point the implanted gene rears its head and causes any offspring to die before they reach sexual maturity.

Local trials have already seen a 90 percent reduction in aegypti numbers, according to the biotech company that developed the mutant gene. Critics have raised a number of objections, however, including the fact that other mosquito species also carry dengue fever, so the potentially fatal disease won't necessarily be eradicated by this risky approach. Others have pointed out that there have only been very small trials so far, so we don't know what happens if GM females, rather than males, are accidentally released into the wild (potentially causing allergic reactions in bite victims), or if some mosquitoes somehow inherit the modified gene but don't die from it. Either way, if Mother Nature does have some sort of retribution in store, then Brazil is about to find out.

In this article: brazil, dengue, dever, genetically modified, gm, mosquito, oxitec, suicide
All products recommended by Engadget are selected by our editorial team, independent of our parent company. Some of our stories include affiliate links. If you buy something through one of these links, we may earn an affiliate commission.