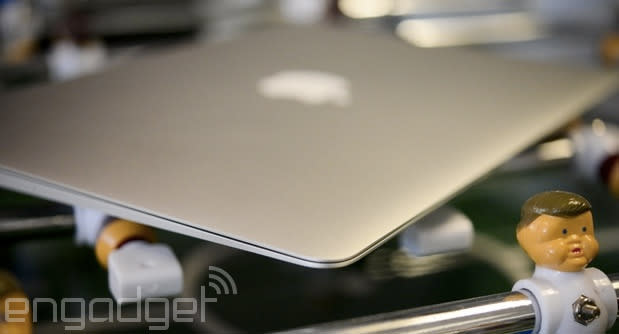 Been waiting for a MacBook Air refresh? Breathe easy, friend, because one has arrived -- well, sort of. Cupertino has quietly updated its online store with a familiar looking ultraportable, matching last year's model almost spec for spec: 4GB of RAM, 128 or 256GB of flash storage, a 1,440 x 900 resolution display, Intel HD 5000 graphics and a slim wedge frame with all the trimmings -- Thunderbolt and USB 3.0 ports and a SDXC card reader. The laptop's processor, on the other hand, has been upgraded: We're still talking about Intel's Haswell architecture, but the standard 2014 MacBook Air now boasts a 1.4GHz Core i5 CPU. That's only a hair faster than last year's 1.3GHz processor while idling, but it also has a higher Turbo Boost speed (2.7GHz compared to 2.6GHz) and could well have better efficiency too, by virtue of the fact that it represents the best of what Intel's fabs are currently capable of. The other big change is in the price, as these new units are $100 cheaper than the ones you could pick up yesterday (or £100 cheaper, if you're in the UK). The Air now starts at $899 (£749) for an 11-inch model, while the 13-inch version will set you back $999 (£849). If you were looking for some Retina action, however, or a major step-change in battery life, then that's probably still some way off.

In this article: air, apple, haswell, macbook, macbookair
All products recommended by Engadget are selected by our editorial team, independent of our parent company. Some of our stories include affiliate links. If you buy something through one of these links, we may earn an affiliate commission.