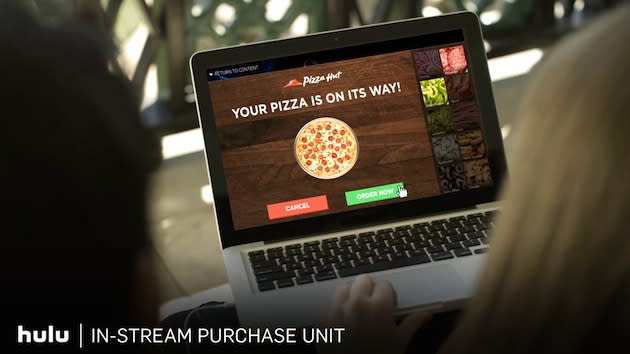 One advantage Hulu has always had over other streaming services is that it has newer TV shows, and you can watch them for free. What's frustrated viewers however, is that it only applies if you're watching on a computer, since phones and TV apps have always required a Plus subscription that opens up a slightly different library of content. Today in New York the streamer announced that this summer it's going to offer "a selection of ad-supported full TV episodes on mobile devices– for free." Other news includes that it's crested six million subscribers to Plus so far -- it had five million in December -- and that its quest to "lead the industry in ad innovations" has resulted in several new developments. The most notable of them is the "In-Stream Purchase Unit" it's bringing out later this year that at launch, will let viewers order from Pizza Hut without leaving Hulu. New CEO Mike Hopkins also mentioned that Hulu is talking to cable providers to get the Plus service on set-top boxes -- Netflix just launched on a few smaller providers -- although there aren't any deals to announce yet.

Hopkins isn't only investing in add innovations though, as Hulu also announced it's new original show Deadbeat has been renewed for a second season. The CEO said Hulu will triple its spending on marketing its original content, and the network already plans to spend more on developing and acquiring new original shows going forward. With new leadership in place, perhaps Hulu can get back on track, but Netflix's 48 million customers are pretty far out in front and Amazon is quickly tightening its grip on second place.

In this article: ads, free, hdpostcross, hulu, hulu plus, huluplus, mobilepostcross, pizzahut, poll, wedgies
All products recommended by Engadget are selected by our editorial team, independent of our parent company. Some of our stories include affiliate links. If you buy something through one of these links, we may earn an affiliate commission.