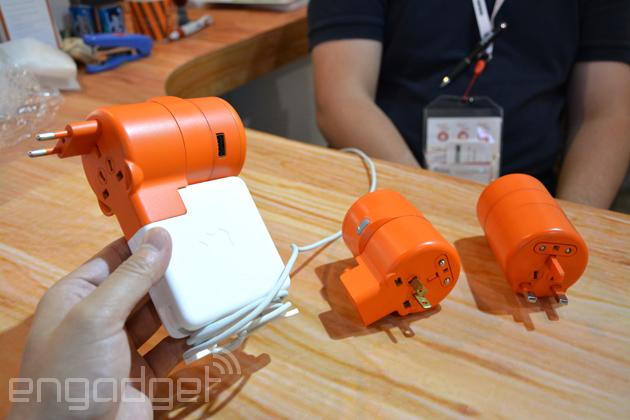 Road warriors who carry a MacBook may already have Apple's world travel adapter kit, or even Twelve South's PlugBug for that extra USB port; but both products require swapping plugs for different regions. Konnext's OneAdapter Twist, however, caters to the slightly lazier travelers: It's essentially a chunky all-in-one travel adapter that sits atop any MacBook charger, though it also works just fine by itself. To switch plugs, simply twist the ring in the middle until it clicks. There's also a 2.4A USB socket (PlugBug's is only 2.1A), and if you need more, you can slot an optional three-socket USB hub in between. The OneAdapter Twist won't be launching until June for around $29 to $39, but for now, we have a quick demo video of a prototype after the break. 9
In this article: adapter, apple, featured, features, hands-on, konnext, macbook, macbookpro, oneadapter, oneadaptertwist, plug, traveladapter, twist, video
All products recommended by Engadget are selected by our editorial team, independent of our parent company. Some of our stories include affiliate links. If you buy something through one of these links, we may earn an affiliate commission.