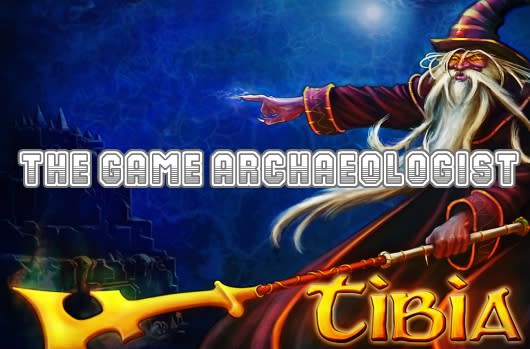 If I were to tell you that there's a Western MMO out there that's as old as Ultima Online and yet still has a half-million players, would you believe me? Heck, I wouldn't believe me even if I came back from the future of having written this article to talk to the past version of me who had yet to start it! But that's Tibia for you: a weird underdog of an MMO that's cruised underneath most players' radars for over a decade and a half.

From its origins as a student project, Tibia jumped in the unexplored waters of the early MMO era and dog paddled for all its worth. This 17-year-old title remains one of the very few active MMOs from the '90s and one of only a handful that stubbornly stuck to a 2-D graphics format even as 3-D swept the gaming genre. And trust me, those aren't even the most interesting facts about it! Nineteen ninety-seven: The year that saw games like Diablo and Grand Theft Auto launch. MMOs were almost unheard-of at the time except for the attention of dedicated geeks. While Korea's incredibly popular Lineage had released and Ultima Online had broken into six-digit populations, they weren't the only ones who showed up to the online party.

A few students at Germany's University of Regensburg decided to craft their own MMO in 1996, a project that became Tibia when it officially launched on January 7th, 1997. The first non-dev player took a few days to show up, and from then on a slow trickle of adventurers gathered inside the game.

Tibia grew steadily over the year, and the developers realized that the tiny server no longer fit their needs. A larger server was set up in 1998 at the University of Passau, and the game's code was rewritten from scratch. This second, more improved version of Tibia launched a new beta program in 1999 and saw its player population grow to 150.

Meanwhile, the developers graduated and decided to turn this fun hobby into a full-time job. In June of 2001, CipSoft became an actual company, and the team took a major step forward in presenting Tibia as a professional project.

From there, CipSoft and Tibia took off. The company that began with four founders in 2001 grew to 30 developers by 2006 and 70 today. Tibia did even better, swelling to hundreds of thousands of players, 72 servers, and over 1.3 million registered accounts. The official game site boasts that the game currently has more than 500,000 players, a number that is disputed by other claims.

For the uninitiated, Tibia is usually compared to two of its contemporaries: Ultima Online (mostly for the similar 2-D isometric graphics) and RuneScape. Both RuneScape and Tibia shared forward-thinking ideas back in the early 2000s, including a free-to-play model that tempted players with a "premium" membership, skill-based leveling, and some of the most generous, lenient system requirements known to humankind. In fact, much of Tibia's success has been attributed to the fact that pretty much anyone, anywhere could play it. Today, both a Flash-based browser version and a standalone client are given as options to the community.

While Tibia started off rather small, it's since grown to include two continents, dozens of islands, and 17,854,464 squares. In this world, players assumed the roles of one of four "vocations" (classes): Knights, Paladins, Sorcerers, and Druids. Interestingly enough, all of these vocations had the ability to do both magic and melee. And if you can get past the graphics, the actual options of things to do in the game are as robust as any you might find in a modern MMO.

For example, players can customize outfits, explore "limitless" character development, go on quests, join guilds, buy houses, and interact with NPCs using an old-fashioned parser (i.e., you actually had to type to NPCs to "talk" with them). The world of Tibia used to be a lot harsher than it is today, with a severe death penalty that included corpse runs. And that NPC interaction system? It used to be that only one player could talk to an NPC at a time, leading to lines as folks queued up for their turn to chat with a questgiver.

So here's one incredibly unique thing about this game that rocked me back on my heels: Tibia has no sound. As in, it lacks all sound effects and music. Fans of the game have defended that move, but you can't deny that it sets it apart. After giving this some thought, I could see it as a connection to the MUD days of yore (which, of course, lacked sound as well). Sound in MMOs is a relatively newer feature if you look at the grand scheme of things.

As with any MMO, players in Tibia could be both supreme jerks and pretty darn awesome. It's not uncommon to read stories about the various scams that players used against new fish, and when a form of griefing that saw players walling others into an area with furniture became en vogue, the company had to step in to make the furniture breakable. Some server communities have generated a bad reputation for creating and enforcing player-made rules, something CipSoft has teetered between approving of and fighting against.

However, it's not been all bad. CipSoft set up and heavily promoted its player tutor program, in which experienced players volunteer to show newbies the ropes. The studio has also gone on a strong campaign of fighting against and banning botters to clean up the game's environment.

While Tibia doesn't have a claim to being the world's oldest graphical MMO (although it comes close), it does have one claim for the history books: It spawned the world's first mobile phone MMO.

TibiaME (Micro Edition) came out in 2003 and currently runs on just about any phone platform you can list, including iPhone. This was a smaller version of the game that only allowed players to choose a Knight or Sorcerer, but it functioned well and grew to 10,000 subscribers by 2009.

Even though Tibia looks as though it would have been at home on the SNES, I think it's kind of charming how a home-brewed MMO managed to thrive and survive through today. I've read a few testimonies of gamers who claim this title as their first MMO, and almost invariably those stories are full of glowing memories. You keep trucking, Tibia, and don't let anyone tell you otherwise.

When not clawing his eyes out at the atrocious state of general chat channels, Justin "Syp" Olivetti pulls out his history textbook for a lecture or two on the good ol' days of MMOs in The Game Archaeologist. You can contact him via email at justin@massively.com or through his gaming blog, Bio Break.
In this article: cipsoft, classic, classic-mmos, classics, f2p, fantasy, featured, free-to-play, game-archaelogist, mmo-industry, newb-quests, nostalgia, opinion, the-game-archaeologist, tibia, tutor, tutor-program, tutorial, world-events, world-quests
All products recommended by Engadget are selected by our editorial team, independent of our parent company. Some of our stories include affiliate links. If you buy something through one of these links, we may earn an affiliate commission.