Dish Network's mistake is a blast from the Mac past 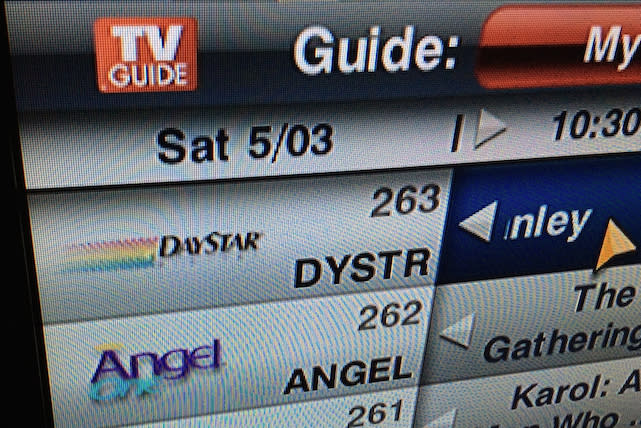 It's not often that the onscreen programming guide for your cable or satellite TV service can trigger an unexpected wave of Mac nostalgia, but that's exactly what happened to me this weekend.

As a Dish Network subscriber, I'm reasonably familiar with the available channel lineup, but most of the time I leave the EPG set to only show high-definition channels. On Saturday night, I wanted to catch a few minutes of the White House Correspondents' Dinner on C-SPAN (yes, it's a wild and crazy party all the time up in here), but I couldn't find the channel right away -- because it was only available in standard-def. Simple enough to fix; I switched the EPG view to show all channels and began scrolling through the listings.

As I passed through the mid-200s channels, mostly populated with religious and inspirational programming, one unfamiliar network caught my eye, as seen in the photo above. It seemed impossible... but sure enough, the logo for the Daystar network actually appeared to be the same as the branding for DayStar Digital, the defunct Mac accelerator and clone maker. "That's awfully unlikely," I thought.

A quick check of the real Daystar network's website and Wikipedia listing showed that indeed, the logo for the network is entirely dissimilar from the CMYK-comet logo for the hardware maker.

What's going on? If I had to hazard a guess, chances are that whoever at Dish is responsible for getting those network logos into the guide may not have looked too closely at the source for this particular channel's branding, even though the channel listing on the Dish website uses the right image. Looking for "Daystar Logo" on Wikipedia does come up with a first result of the DayStar Digital logo -- but the next one down is for the TV network. We'll follow up with Dish and see if they acknowledge or fix the error. In the meantime, enjoy this tiny taste of Mac history right there on your TV screen.

In this article: daystar, dish, opinion, vintage
All products recommended by Engadget are selected by our editorial team, independent of our parent company. Some of our stories include affiliate links. If you buy something through one of these links, we may earn an affiliate commission.